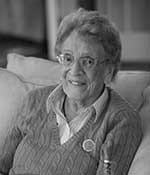 Helen was born on October 9, 1920, the year women gained the right to vote, in New Berlin, Chenago Co. N.Y. She was the daughter of Elizabeth and Joseph Glennie and the sister of the late Margaret Hilts Sweeney, Harold and Elizabeth Glennie. She was the loving wife of Richard R. Jennings Jr. who passed away in 2010 and whom she never stopped missing. She was the mother of Richard (Mary) Jennings of Wakefield, Sharon (Fred) Hupprich of St. Thomas, U.S. Virgin Islands, Patti (Bill) Kumpel of Wakefield and John (Jon Larson) of South Portland, Maine. She also leaves her beloved cat and constant companion, Sterling. Helen also leaves behind her six precious grandchildren who brought her such joy: Amy and Emily Kumpel and Andrew, Elizabeth, Matthew and Christopher Jennings as well as her seven great-grandchildren and many nieces and nephews. She spent lots of time hugging her 6th great-grandchild, Sid, over the holidays. She will be forever remembered by her family for her beautiful smile, her kindness, her endless love, her sense of adventure and her love of cooking and baking for her family.

Helen was our own “Rosie the Riveter” during World War II. She remembered applying for a job at the Charlestown Navy Yard and instead of the expected secretarial job given her degree from the Burdett College of Business in Boston, she was assigned as a ship fitter’s assistant. Tool belt strapped around her waist, Helen donned leather gloves and did her part for the war effort building ships while her love served in the Army as a medic in North Africa and Italy. Dick and Helen were married on January 12, 1946 in Utica, New York, and soon after moved to Charlestown and then to Somerville where three of their children were born. In 1954 they moved their young family to Wakefield where they happily remained and had their last child, John.

In 1968, Helen went to work part-time at the brand-new Jordan Marsh at Burlington Mall in Designer Dresses where she was sought after for her excellent taste, fashion knowledge and recommendations to countless women from surrounding towns. They remembered her years later even after she retired.

Helen always said she was so glad she had made Wakefield home for her family. She found a family in her life-long friends, her neighborhood, and enjoyed all that Wakefield had to offer. She was a frequent visitor to the library as she loved to read and instilled her love of reading in her children and grandchildren.

She took great joy in Lake Quannapowitt and remarked on its beauty just a few days before she passed away. Helen and Dick could be seen frequently in their younger days canoeing and sailing with their two boats, the Snark and the Penguin, and walking around the lake. They enjoyed taking their children swimming and picnicking at the head of the lake and at the Common. They also biked with their 10-speeds throughout Wakefield and beyond, and Helen thought the proposed bike lane for Main Street was a great idea.

Through the years, Helen and Dick especially loved watching the 4th of July WSSC parades and Helen loved watching her great-grandchildren Luke, Susanna, Ryan, Drew and Madison in the children’s events last summer. She often walked through the upper common pausing at the Veteran’s Walkway stone to remember her love, Dick.

Always open for new adventures and meeting new people, Helen and Dick enjoyed their many travels throughout the United States and Canada visiting most of the National Parks as well as the major cities sometimes towing their Prowler Trailer behind their blue Suburban. They enjoyed hiking, cross-country skiing and working out at Mike’s Gym well into their 80s. They were proud to say they hiked to the top of Mount Washington even if Helen did end up in the ER with a sprained ankle. They also traveled to the Caribbean, spending prime winter months with their daughter Sharon and son-in-law Fred in St. Thomas and their son John and son-in-law Jon in Savannah. Helen and Dick also took several trips to Europe where they especially enjoyed exploring Italy and London.

Helen and Dick believed education was the key to success.

Helen was never happier than when she was spending time with family and friends. She moved into independent living at Brightview two years ago and was soon dubbed “The Mayor of Brightview.” She knew most of the residents and staff by name and was the unofficial welcomer. She always lent an ear and encouragement to her new friends. Brightview became her new neighborhood, and she made the most of every opportunity. She loved the staff and her family is forever grateful for their kindness and friendship. Helen will be greatly missed by all who knew and loved her.

The services will be private. Arrangements were in the care of the McDonald Funeral Home, Wakefield. 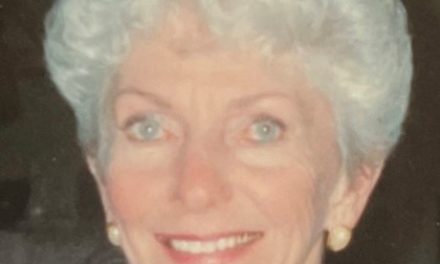