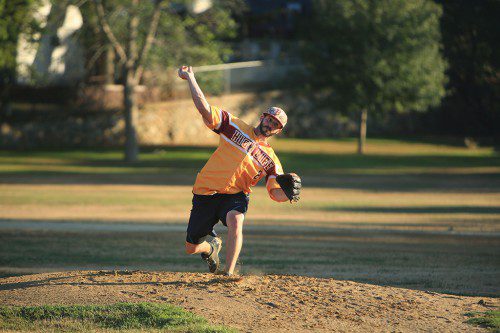 NICK DETTORRE pitched all seven innings for the High Life giving up two runs on seven hits, while striking out eight and walking two. Dettorre also had two hits at the plate. (Donna Larsson Photo)

WAKEFIELD — The Twi-League playoffs kicked off on Wednesday evening at Moulton Field with the top-seeded High Life taking a 1-0 series lead over the fourth-ranked Unknowns with a 12-2 victory in the best-of-three semfinal.

High Life got a stellar performance from starting pitcher Nick Dettorre as he hurled a complete game (seven innings) allowing only twp runs on seven hits while striking out eight and only walking two batters.

On the other side, Unknowns’ pitchers got touched up for 12 runs on 11 hits. Tom Caron got the start for the Unknowns, going the first four and two-thirds innings before Adam Chanley came in for him.

High Life got the lead early on with a pair of runs coming across in the first inning. Jason Federico came up with one out in the bottom of the first and smacked a double over the center fielder’s head. Federico had two doubles and three runs scored in the game.

He came around to score when the next batter, Matt Davis, grounded one through the middle for an RBI single. Davis was retired when Mark Sullivan grounded into a fielder’s choice for the second out. Anthony Caracciolo of Stoneham singled through the right side to make it two on with two away. Next up was Eric DiTonno who lined a single to right to bring home Sullivan and make it 2-0 High Life.

DiTonno had a huge day at the plate, going 4-for-4 with three RBIs.

The lead was short lived for the High Life as each team went quietly in the second. But the Unknowns mounted a threat in the top of the third to tie the game at 2-2.

After a pair of singles by Kevin Murray and Geoff Eriksen, Chad Dwyer stepped to the plate with two out. Dwyer tripled with the bases empty and two down in his first plate appearance, but this time he had runners on base. The Unknowns third baseman launched another blast over right fielder Tommy Sheeran and two runs came in as Dwyer ended up on third base once again.

Dettorre bore down and got the next batter to bounce out to Davis at shortstop to stop the threat and hold the Unknowns to just two runs.

The Highlife came back and got a run in its half of the third with DiTonno racking up his second hit and second RBI with two on and one out. A line-drive to first by Rich Winant resulted in an unassisted double play to end the inning with just the one run.

Dettorre set it in cruise control after that and the High Life wouldn’t need any more runs. But they’d score them anyway.

The top seed proved why it was league’s best this season, as it broke it open with a six run fifth inning, capped by a bases loaded line drive by Cliff Silva. The screamer skipped by the right fielder and went to the fence, clearing the bases as Silva cruised around touching them all and scoring without a throw home.

Silva, a lieutenant for the Wakefield Fire Department, had arrived just a few innings before and barely had time to stretch out before grabbing a bat. As manager/extra hitter, Mark DiNocco’s turn to bat came up in the order he pulled his own number and sent up Silva as a pinch-hitter.

The move paid off as a 5-2 game became a 9-2 game with one swing and any hopes the Unknowns had of coming back went up in smoke.

The Highlife added three more runs in its half of the sixth and the Unknowns failed to score over the final four innings. Their only chance to score came with two outs in the sixth when Luke Martin launched a triple to left center but Dettorre got the next batter to fly out to end the threat.

High Life manager DiNocco spoke about the win after the game, giving credit to the pitching and defense, as well as the timely hitting that gave them the win.

“Nick (Dettorre) shut them down, we’re up 1-0. We had one of the best defensive games we had all season,” DiNocco said. “Some of the younger guys came up big. Cliff Silva, a veteran, came a little late in the game, as a pinch-hitter and opened the game up real big for us.”

With a 1-0 lead the High Life look to close out the best-of-three series on Friday with the game scheduled to start at 5:45 p.m. down at Moulton Field once again.

“We’re hoping to have another veteran guy, Michael Day, on the mound Friday,” DiNocco said. “Hopefully he’ll start and close this out for us in two.”