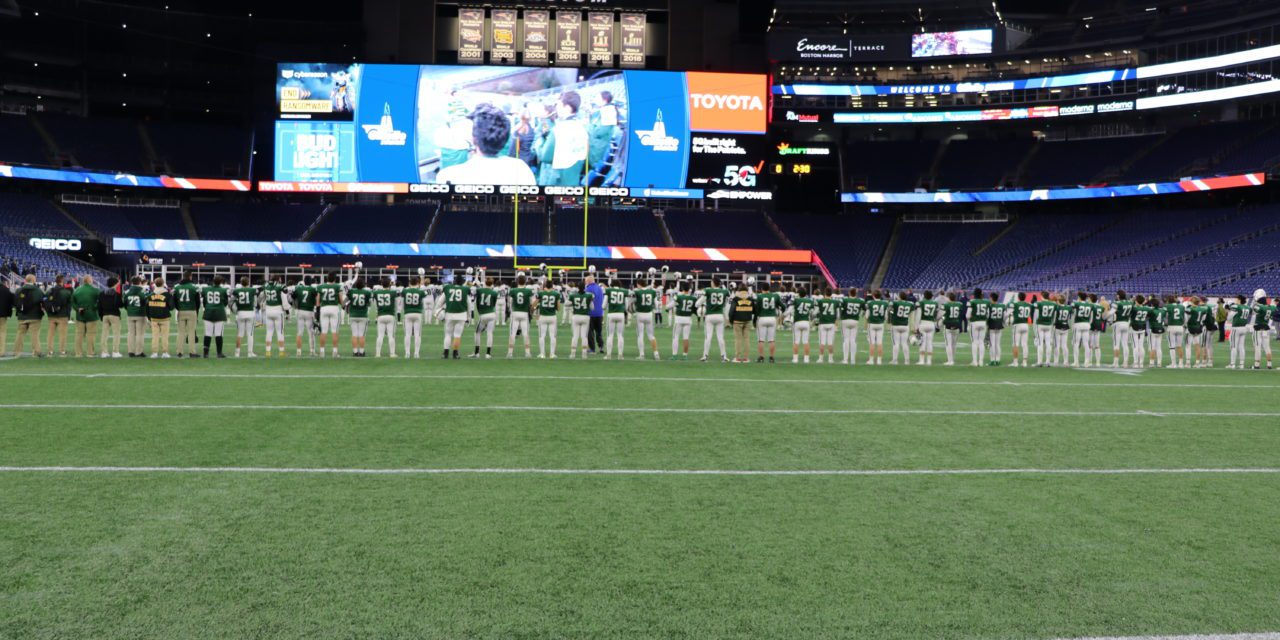 THE HORNETS, pictured in the Div. 5 Super Bowl at Gillette Stadium last year, have plenty of buzz entering the season as one of the teams to beat in the Cape Ann League and the division. (File Photo)

NORTH READING — In the wake of last year’s historic achievements, which included a visit to Gillette Stadium to compete for a MIAA Division 5 Super Bowl title, some might say the 2022 North Reading football program has a tough act to follow. But as the new season gets underway, there are plenty of reasons for renewed optimism.

When North Reading faces Northeast Metro Tech on Friday evening, the Hornets will turn the page on a captivating 2021 campaign, which featured a hugely successful 7-1 run, followed by a trio of one-sided playoff wins. Unfortunately, the Hornets suffered a bitter setback in the finale, yielding a one-touchdown decision to repeat Super Bowl champion Swampscott.

According to Head Coach Ed Blum, North Reading returns relatively intact and shows great promise in all three facets of the game.

“We have a lot of guys who got some good experience last year,” said the fifth-year coach. “A lot of our senior players had good seasons as juniors and now they return as experienced leaders. But we also have a lot of younger guys who are learning their roles so there’s a good mix between the two.”

The Hornets will turn to co-captain Alex Carucci, who will operate with a slightly depleted receiving corps after the departures of favorite targets Ryan McCullough and John Jennings. While the senior tandem of Craig Rubino and Aldo Vittozzi are well-established at wideout, there are a number of relative unknowns on the roster. Caruccci, however, believes there is ample talent to fill the graduation vacancies once this squad finds its chemistry.

“There’s definitely a lot of skill at the wide receiver position,” said the senior QB, who threw for 26 TDs last year and rushed for 8, including the sole North Reading score in the Super Bowl. “I agree that some of the guys flew under the radar but I’ve been playing football with many of them since the third grade and I’m very excited to see what we can do. And it’s good to have Batten in the backfield again.”

The “Batten Show,” as Carucci describes junior tailback Will Batten, looks to build on last season’s impressive resume which included 22 rushing scores and 1,573-yards on 160 carries.

“It has been enjoyable watching him grow into the position since freshman year,” said Blum of Batten, who impressed in the playoff opening round against Fairhaven with 4 rushing TDs. “Following his blocks and finding the holes has become natural for him.”

Along with Carucci, Blum and his staff have selected deserving leaders Rubino, Matt Guidebeck, Sam Morelli, Owen Delano, and Anthony Pino as team captains. Pino, a fan favorite amongst the North Reading faithful, made great strides during the off-season to bring his game to the next level. As his coach explained, Pino is one of those inspirational players who leads by example and does all the extra things to get ready for Friday nights.

“Anthony did a great job getting himself in really good shape,” said Blum, of the senior linebacker who often instilled fear in opposition quarterbacks. “We’re very fortunate to have him back. He’ll be helping us on both the offensive and defensive lines. He has been a quiet kid but he has become more outgoing in his senior year. Anthony is all about enthusiasm, effort, and energy and on the field, it’s contagious.”

Touted by many football pundits as one of the best kickers in high school football, all-purpose senior Matt Guidebeck will add a strong, accurate leg to his duties as receiver and linebacker.

“Matt has been one of the hardest workers in our program over the last several years,” said Blum of his reliable placekicker. “He takes such pride in doing the little things to maximize his potential. Since he came in as a freshman, Matt has really taken ownership of becoming the best kicker/punter he can be. He is a game changer for us.”

There is a perception that North Reading didn’t perform to expectations during the pre-season. Blum admitted that his team faced “adversity and challenges.”

“When I look at the pre-season, it didn’t necessarily turn out the way I expected it to,” said the coach, who led his squad to Winchester, Nantucket, and Wakefield in recent weeks. “While we saw positives on both sides of the ball, there were ups and downs. But it was the wake-up call this team needed and I’m excited where this group is physically and mentally going into the year.”

“We did face some adversity during the pre-season,” agreed senior linebacker Morelli, who led the Hornets in tackles last year. “On the mental side, there are a few things we have to figure out but I think we’ve turned a corner and we’re hitting our stride.”

Along with the game planning and rigorous preparation, the North Reading coaching staff has had to deal with the inevitable comparisons to last year’s Super Bowl team. The Boston Herald, for instance, placed a target squarely on the Hornets’ backs by ranking them No. 1 this season in Division 5. Some supporters have already made plans for another Super Bowl visit.

“A lot of people are saying that we’ll be back at Gillette,” said Blum. “You’re dealing with high school kids and this stuff can have an impact on them. As a team, we try to block out some of the outside noise. We’ve had some good conversations about it. When people say things like that, they’re not respecting last year’s team and what it took to reach that milestone.”

North Reading opens the 2022 season on Friday night, hosting Northeast at 6 p.m. Last year, the Hornets handed the Knights a 49-20 defeat in the opener. They followed by outpacing opponents, including post-season meetings, with a significant 471-184 point margin. The only regular season loss to Amesbury was controversial, marred by poor officiating. The only team that threatened was archrival Lynnfield, understandably, in a 28-25 Thanksgiving nailbiter. And then, of course, a season-ending 14-7 defeat to Swampscott in the Division 5 Super Bowl on December 1st.

Based on some of these numbers, it stands to reason that North Reading has earned the reputation as the team to beat this season but Morelli looks at it differently.

“As a collective team, we try to tune that out,” he said. “What the newspapers say doesn’t have much substance. What we put on the field is substance. As far as a target on our backs, that fires me up. A few years ago, playing against North Reading was just an every day game. But now, other teams are circling us on their calendar. They can’t wait to play us and that just motivates us even more.”