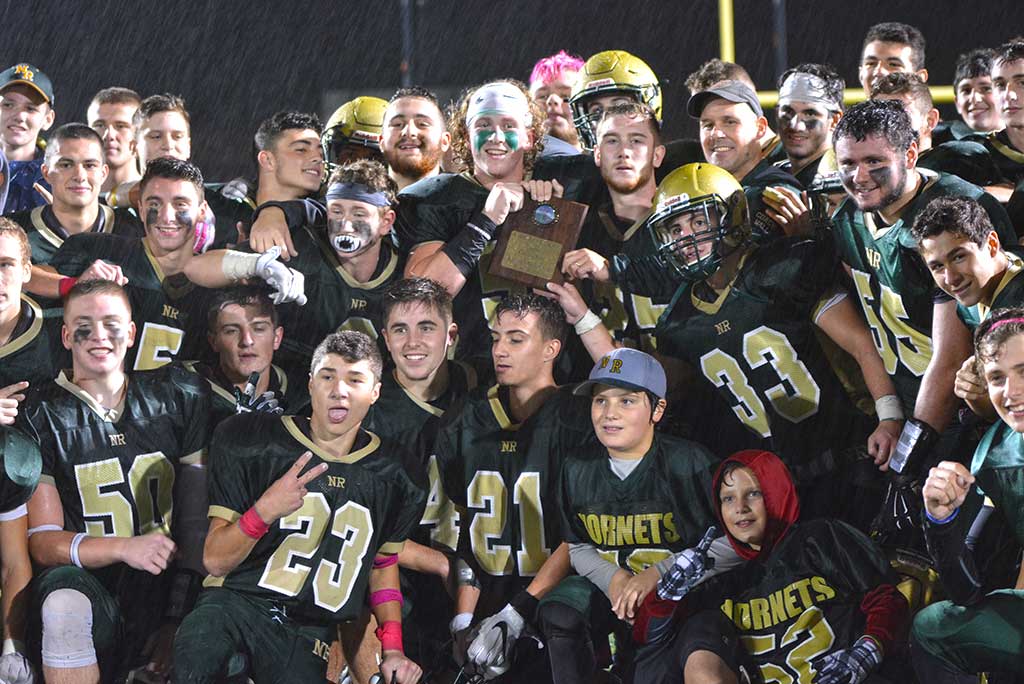 CAL CHAMPIONS. The 2016 NRHS football team displays their first place plaque after winning the Cape Ann League championship for the first time since 1980. Every member on the team, coaches included, was soaked to the skin but jubilant. (Bob Turosz Photo)

The “Miracle on Ice” happened that winter. President Regan was  elected to his first term as President. The untimely death of Beatle John Lennon happened. These were just a few of the history–making events in the year 1980, which also happens to be the last time the North Reading football Hornets won a Cape Ann League division championship. 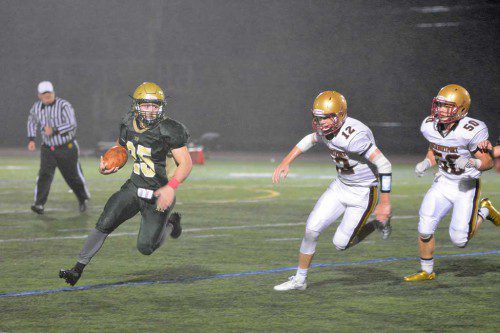 SENIOR RUNNING BACK Matt McCarthy had another special night for the Hornets with nearly 200 yards rushing as the Hornets beat Newburyport to become champions of the CAL Kinney Division. (Bob Turosz Photo)

Until last Friday night, when the Green and Gold soundly defeated the Newburyport Clippers 20–6, clinching the CAL Kinney (Large) Division crown, despite the mighty wind and rain that pounded the Arthur Kenney Field all night long.

For North Reading’s 14–year veteran head coach, Jeff Wall, this is first his first CAL championship and it is one he will forever savor. “About time,” said Wall on his first–ever division season win. “I’m so happy for the kids. They worked very hard all during the off–season. Winning the division was one of their goals. After the Masco game (which North Reading lost 21–6 on September 30), we talked about setbacks and that whenever you have setbacks, it allows for the opportunity for growth. The coaching staff and I told them do some soul searching over that weekend and stay together as a group. They came back the next week stronger than the week before. I couldn’t be more proud of these kids.”

The contest was played under monsoon–like conditions that plagued most of Eastern Massachusetts that night, with heavy winds, rain coming down in torrents and the occasional flash of lightning in the far distance. (The Masco–Triton and Wakefield–Winchester games going on at the same time were suspended and resumed on Saturday because of lightning in those areas).  North Reading–Newburyport  remained scoreless until the final quarter due in large part because of the poor conditions. With the heavy rains and winds, at times the game looked like it was being played in a hurricane. Players from both sides looked like they having a tough time adjusting to the bad conditions. The amazing thing was that there was only one turnover combined, which is remarkable because the ball was constantly wet. 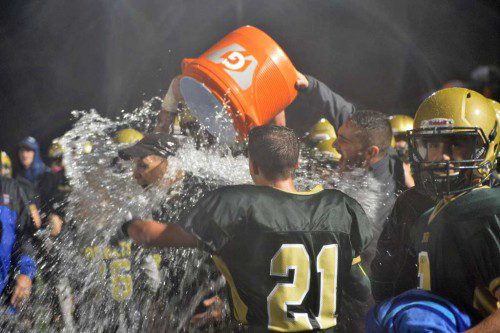 VICTORY SHOWER. NRHS football players soak head coach Jeff Wall with the traditional victory shower as the Hornets won the Cape Ann League championship for the first time since 1980 Friday night. Since the game was played in monsoon–like conditions, Wall was already soaked to the skin at that point anyway. (Bob Turosz Photo)

The Hornets got on the scoreboard first, thanks to junior quarterback Kyle Bythrow, who helped his own cause by going 18 yards into the end zone on the very first play of the fourth quarter. The extra point attempt was blocked so the score was only a 6–0 lead for the Green and Gold.

On their next drive the Clippers failed to answer and turned the ball over on downs at their own 46 yard line. The Hornets took advantage of the good field position with a nine play drive that was completed with senior captain and running back Matt McCarthy’s  2 yard touchdown run to increase the Hornet lead. Bythrow then ran for the two–point conversion and just crossed the goal line to give North Reading a 14–0 advantage with 2:37 to go in the ballgame.

The Clippers got the ball back but again turned it over on downs, this time from their own 40 and on the first play of the Hornet drive, McCarthy went the whole 40 yards for his second touchdown of the night. The extra point attempt failed but the Hornets had the all-important 20–0 lead with less than 1:30 left in the game.

Despite the horrible weather, McCarthy was his usual self, running for 198 yards on 27 carries. With the two touchdowns, he now has 18 overall in the short season, (16 rushing, one on a punt return, and one on a defensive pick–six). It is no surprise that whenever McCarthy has run over 100 yards in a game in the last two seasons, the Hornets are undefeated.

The Clippers kept fighting and made one more attempt to score before time expired and succeeded as quarterback Rob Shay found receiver Rob Federico right at the goal line for a meaningless TD. Their extra point attempt was blocked, finishing the scoring for the evening at 20–6, North Reading. (It was at about this point the players on the North Reading sideline treated Wall to a surprise “victory shower” with a water–filled Gatorade bucket. It hardly mattered, Wall and the rest of coaches were soaked to the skin by that time, anyway.)

The Green and Gold defense has improved greatly as the season rolled on and was suffocating against the Clippers, who had a tough time moving the ball all night. This showed in the stats as Newburyport could only muster 161 yards of total offense. Hornet senior captain and defensive lineman Bob O’Donnell and Michael Quaratiello were on Shay’s tail the whole night and defensive backs senior captain John Merullo and Rob Donohue were all over the place.

The CAL Kinney Division champs finish the regular season at 6–1 and 3–1 in the division. The champs are rewarded with hosting a playoff game for the second straight year. This time they will be play host to the Bedford Buccaneers in the first round of the Massachusetts Division 2A North Playoffs. These teams played last November 13, with North Reading winning 21–0, with McCarthy running 153 yards and two touchdowns. The game is tomorrow night at 7 p.m. Good luck to the Green and Gold in the postseason.