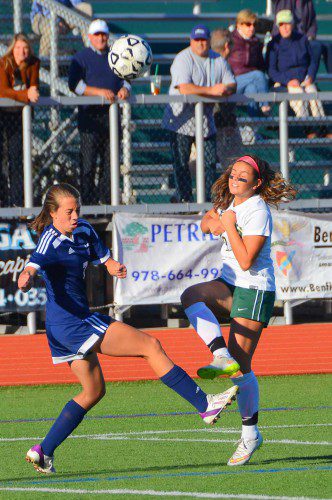 FRESHMAN ALYSSA PRUSIK heads the ball away from her opponent. (John Friberg Photo)

NORTH READING — The NRHS girls varsity soccer team continued their march into the state tournament this week, improving their record to 12–3–1 with wins over Triton and Pentucket. The girls took on arch rival Lynnfield on Tuesday at 7 p.m. (after deadline) and will finish up on Thursday, Oct. 27 by visiting Bishop Fenwick.

The Lady Hornets travelled to Newburyport to take on the CAL Kinney Division leaders on October 17 and tied the Clippers 0-0. Senior Katerina Hassapis was outstanding in net with 16 saves.

North Reading quickly got on the board in the first half. In the third minute Hassapis sent a goal kick to midfield where Hill easily beat a Sachems defender to the ball and finished on a breakaway past the on rushing goalie.

About 15 minutes into the half the Pentucket starting goalie Ashley Riter went down injured forcing in the backup Emma McNeil. After the substitution the Hornets continued to dominate, bombarding McNeil with shots. But she made a handful of great saves to keep the game 1–0 North Reading at the half.

Much like the first half the Hornets scored an early goal to start the second. In the 48th minute Vesey collected a pass from Muise at the top of box and hit a rocket McNeil had no chance of saving just under the crossbar. Muise added a late goal to finish off Sachems.

The Hornets improved to 12–3–1 with their 2–0 victory over the Triton Vikings on Friday afternoon. Junior Meredith Griffin led the way with a goal and an assist. Katerina Hassapis earned her 12th shutout in 16 games.

It took a while for North Reading to score in the first half. The first goal didn’t come until the 38th minute when Griffin finished after a taking a pass from Jessica Muise. It didn’t take long for goal number two which came just over a minute later from Rachel Hill. The game would remain 2–0 at the half.

The Hornets couldn’t manage any goals in the second half but the defense held strong. Triton was held off the scoreboard and North Reading went on to the victory.