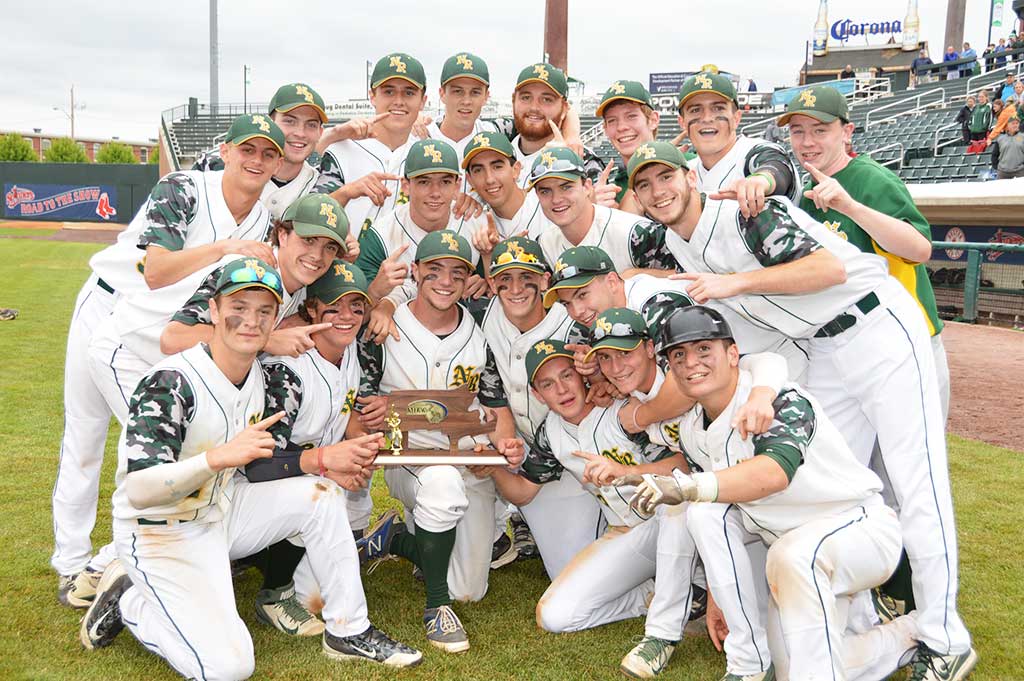 JUBILANT BASEBALL HORNETS swarm with their championship trophy after defeating Lynnfield, 5 to 1, in the Division 3 North Championship game on Saturday at LeLacheur Park in Lowell. (Bob Turosz Photo)

NORTH READING — The North Reading High baseball team defeated Lynnfield, 5–1, in the Division 3 North finals last Saturday afternoon at LeLacheur Park in Lowell to win the north sectional title one year after missing the tournament by a single game.  With that win, the top–seeded Hornets improved to 21–3 overall as they faced East Bridgewater in the Div. 3 state semi–finals at Fraser Field in Lynn (results not available at press time).

If the Hornets won that game, they will play for the Division 3 state championship this Saturday at Holy Cross in Worcester (opponent unknown at press time).

The third-–seeded Pioneers, meanwhile, ended the year at 19–5. 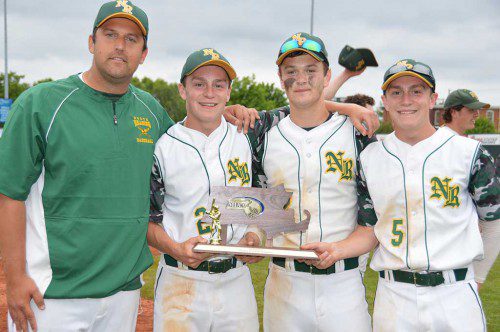 “Our kids seem to get up more for Lynnfield because of the rivalry,” explained Hornets manager Eric Archambault. “It is always an intense game when we face them.”

North Reading went 2–1 against the Pioneers this year as the teams split their games during the regular season.

Hornets pitcher Greg Johnson was the winning pitcher going all seven innings. He gave up one earned run, four hits, one walk and struck out four to improve to 6–1.

“He has been a great pitcher for us the last two years,” said Archambault. “This was the best I have ever seen him.”

The Hornet offense had seven hits led by Jared Valade who went 2 for 3 including an RBI triple to right center field. He also scored three times. Pat Driscoll was 2 for 4 with one run scored. John Merullo also had an RBI single in the fourth.

North Reading scored twice in the bottom of the second inning and once more in the fourth. They then added two more runs in the sixth.

Lynnfield, who allowed a pair of unearned runs, scored its run in the top of the third.

A pivotal play occurred in the top of the third inning when Lynnfield, trailing 2–0, tried to rally. With a man on second and two out, Lynnfield’s Justin Juliano doubled in a run but was tagged out trying to stretch it to a triple by Hornet third baseman Patrick Driscoll, ending the inning. The Lynnfield Coach protested the call, but to no avail. Johnson was lights out the rest of the way and had the Pioneers under control for the complete game win.

In the semifinal game on June 8, the Hornets doubled up East Boston, 14–7, at Fraser Field.

“We knew that they were a good hitting team and that we had to bring our bats,” pointed out Archambault. “We stayed aggressive on the bases and got a lot of steals that set us up.”

The Hornets offense pounded out 13 hits against Jets pitching. Sean DiVecchia and Valade were both 3 for 3 at the dish. DiVecchia had two RBI and scored three times while Valade scored twice.

Mike Driscoll was 2 for 4 with two RBI and two runs scored.

The Hornets scored twice in the first inning and eight more runs in the second to take a 10–0 lead.

“The offense gave him some breathing room,” pointed out Archambault.