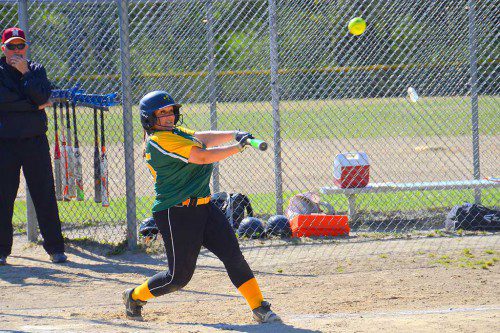 NO DOUBT ABOUT IT. Hornet senior Taylor Connor launches this pitch over the center field fence for a long home run. (John Friberg Photo)

NORTH READING — The NRHS Lady Hornets’ most successful softball season in five years came to an abrupt end in the Division 2 North quarterfinals last Tuesday, when the girls lost to Swampscott, 5 –2, at the Little School field.

This one was nip–and–tuck throughout and everyone had the nagging feeling that the last team to score would win. Unfortunately, that team turned out to be the Swampscott. The two teams were evenly matched and tied, 2–2 through six innings, but then the Big Blue pushed three runs across the plate in the top of the seventh to seal the win.

Swampscott took a 1–0 lead in the second inning and went ahead 2–0 after the top half of the fourth inning. But North Reading fought back to tie the game with single runs in the fourth and fifth innings, on the strength of RBIs from Carly Swartz and Guiliana Peppe. Overall, the Hornets managed nine hits against the Big Blue pitcher.

Pitcher Julia Perrone went all seven innings for North Reading, and took the loss, throwing 140 pitches, 84 for strikes. She gave gave up 10 hits but only four of the runs were earned and had eight strike outs vs. three walks.

Certainly this was a tough loss, but the team finished 18–5 and won their first game in the MIAA tournament since 2011. Despite losing valued seniors like Taylor Connor, Lily Malloy, Francesca Bonacci, Rebecca Clark, Sarah Sabella and Carly Swartz, the Lady Hornets will return 11 varsity players next year, including pitchers Perrone and Cassandra Pascucci.

The future of North Reading High School Softball is bright.