Hornets enter playoffs with momentum after 41–8 rout of Clippers 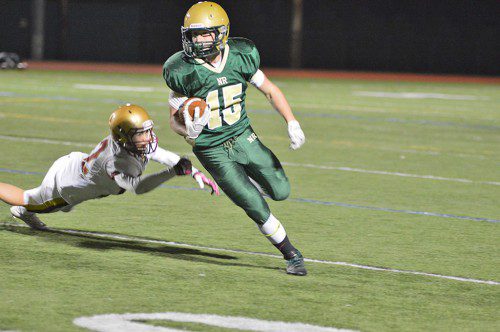 NORTH READING — 2015 is turning out to be a bad year to be a long-time nemesis of the Hornet football program. Simply put, this is the year the Hornets are throwing all the monkeys off their backs.

The gridiron squad exterminated another monkey and longtime tormenter as they defeated the Newburyport Clippers 41–8 last Friday night on the Arthur Kenney Field. It was North Reading’s first victory over Newburyport since a 2–0 barnburner in 2006.

At halftime, the Hornets had a commanding 31–0 lead, which gave their Head Coach Jeff Wall a chance to rest his first string starters, a key move going into Saturday’s playoff battle against the Triton Vikings.

“It was actually stressful (in the second half) trying to get everyone in. I felt bad if I didn’t get everyone in as much reps as they wanted, but it’s hard with 64 people,” said Coach Wall. “We should be going into the playoffs healthy, we got out of this game injury free and so that was good. The starters got to play a real good half, we got a few things clicking that we were hoping to get and then we rested them. It was a perfect situation for us.”

The Hornets drew first blood in the game thanks to a 31 yard Angelo Disanto field goal to give North Reading a 3–0 lead. That was the senior’s first field goal attempt of the year and he would nail a second attempt early in the second half as well, and connecting from 27 yards out. Disanto has quietly become a key weapon on the team as other teams in the Cape Ann League struggle in the kicking game.

After the field goal, it became the Matt McCarthy Show. The junior running back would grab the next three touchdowns on runs of 2, 4 and 9 yards – tag on three straight Disanto extra points and the Hornets were 24–0 with just 1:53 left in the first half.

McCarthy would rush for 113 yards on just 15 carries. He has already already run 1,000 yards through seven games this season and has a chance to beat his brother, CJ’s rushing school record that was only set in 2013, when CJ was a senior.

Just 57 seconds later, the Hornets would strike again with before the first half expired, as senior running back David Smith crossed the goal line from 5 yards out, set up by a Green and Gold fumble recovery by junior defensive lineman Bob O’Donnell deep in Newburyport territory. The extra point was again kicked by Disanto and North Reading had a 31–0 lead at the half.

O’Donnell has been a monster on the defensive line as he also notched another sack during game. His head coach has also been impressed by his performance this season. “He’s phenomenal,” said Wall. “We could play him at linebacker if we needed him but on the defensive line he’s a force to be reckoned with. He’s quick, has good feet, strong and his motor is always running. He’s a high impact kind of player for us.”

The defense as whole played very well as the Newburyport offense could not get any positive plays going, grabbing only six first downs the whole evening and gaining only 38 yards on both the ground and the air, for combined 76 yards of total offense. Newburyport could only manage one touchdown.

The only touchdown of the second half came in the fourth quarter as sophomore running back Ryan Edison got his first score of his young varsity football career on a 23 yard carry. The Disanto extra point was good to complete the 41-8 Green and Gold win.

The Hornets are 6–1 (4–1 in the Cape Ann League’s Kinney division) and are heading to MIAA postseason play for the first time since 1980 and the first time since the new playoff format started in 2013. They will be taking on the Ipswich Tigers this Saturday afternoon at 1 p.m. at the Arthur Kenney Field in the semifinals of the MIAA Division 4 playoffs for the right to move on to play either arch–rivals the Lynnfield Pioneers or the Watertown Raiders, who play on Friday night. North Reading will be going in to the tournament as the second seed.

In the opening game of the season, North Reading beat Ipswich, in Ipswich, 27-14 and dominated the Tigers 27–0 until Ipswich scored two late touchdowns. McCarthy had one of his best games of the year running for 236 yards and rushing for his first three touchdowns of the year.