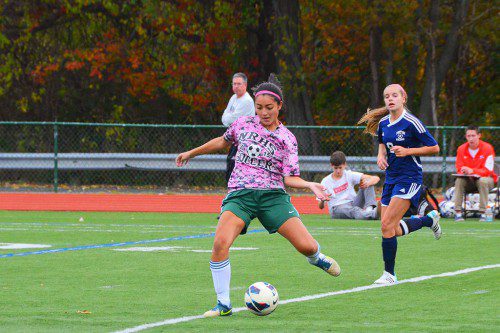 North Reading got off to a quick start in their first non-league game of the season. Hill scored all three of her goals in first half and Nadeau scored another. The Hornets took a commanding 4-0 halftime lead.

The strong midfield play of seniors Jill Comeau, Katie Welch, Alexa Capozzoli and Maddie Syer kept the Rams off the board in the second half. Zarella added a goal and North Reading cruised to the lopsided victory.

The Hornets recorded a 2-1 victory over the visiting Triton Vikings on Thursday. Juliette Nadeau and Rachel Hill scored for North Reading.

It was clear from the start the Vikings strategy was to pack it in on defense. Even with the Hornets sound passing they still had trouble breaking down Triton in the first half. As the halftime whistle blew the game was deadlocked at 0-0.

North Reading’s hard work finally paid off 15 minutes into the second half. Sophomore Karlie Vesey sent a perfectly placed cross to Nadeau who calmly finished into the open net. The Hornets continued to be in control until a miscue erased the lead. In the 71st minute Hassapis sent her goal kick right to a Triton player who easily scored into the yawning cage to tie it up.

The game didn’t remain tied for long. In the 73rd minute Nadeau broke free from her defender and blasted a shot on goal. The shot was saved but Rachel Hill found the rebound and buried the game winner.

North Reading controlled the first half with several quality scoring chances. Vesey opened the scoring when Jessica Muise sent in a nice ball on a free kick and Vesey put it in off the far post. Tayas made it 2-0 when she cranked a left footed shot past the keeper off service from a Muise corner.

Nathan scored the final goal of the afternoon late in the first half. The Hornets kept the Sachems off the board in the second half and went on to the shutout victory.