Hornets ground Falcons, to play for trip to Division 2A Super Bowl 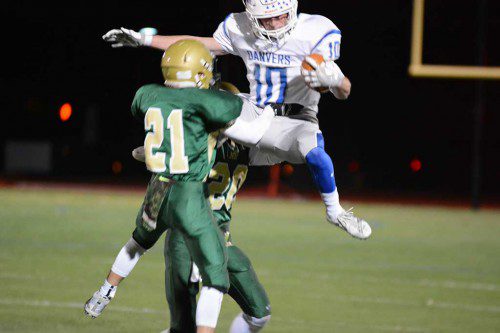 FALCON HUNTING. Hornet defenders Nick Dell Isola, (21) and Tom McHugh (20) combine to bring Danvers running back Matt Andreas down to earth. The Hornet defense stifled Danvers in the second half while the offense ignited for the 35–14 win. (Bob Turosz Photo)

NORTH READING —  In the year of improbabilities, the North Reading football Hornets are stunning the Massachusetts high school world, as they defeated the Danvers Falcons 35–14, last Friday night, in front of their passionate and rowdy student body and fans of the Arthur Kenney Field. The win gets them a meeting with 9–0 Marblehead High School tomorrow night for the Division 2A sectional final.

Also in a year of amazing achievements, North Reading Head Coach Jeff Wall  could not be prouder of being the coach of the group that has gotten further in the postseason than any of the teams in his tenure.

“I couldn’t be prouder of these kids,” said Wall. “No one gave us a chance and the kids embraced it, they stepped up and accepted the challenge. They deserve this win.”

Just under three minutes into the ballgame, Danvers struck first with a 45 yard pass from quarterback Dean Borders to Tahg Coakley. The extra point went through the goal posts for a 7-0 lead.

It took until the middle of the second quarter for the Hornets to answer right back with a score of their own on star senior captain running back Matt McCarthy’s 5 yard run into the end zone which was setup by a 49 yard run of his own two plays prior. And then, senior captain Bobby O’Connell’s extra point was good to tie up the game at 7.

The Green and Gold would gain their first lead of the game on one of junior quarterback’s Kyle Bythrow’s best throws of his career, finding Bobby Donohue down the right side. Donohue made a great catch and run to the goal line for a 61 yard score. O’Donnell kicked another extra point to give North Reading a 14-7 lead with just 1:35 left before halftime.

There was still plenty of time left for the Falcons as Borders struck again for a big score going 43 yards to receiver Kieran Moriarty for the tying score, to make 14–all going into the break.

In the second half the Hornets’ defense shut  Borders down as the Danvers offense could not do really anything after the break, only throwing for 48 yards and and rushing for a net 8 yards. The likes of McCarthy, O’Donnell, Mike Quaratiello, senior captain John Merullo, Kyle Conley, Michael DiStasio, and Nick Del Isolla all made plays to keep the Falcons grounded.

The Green and Gold would grab the lead for good on a McCarthy 35 yard romp to the end zone. The extra point went just wide of the goal posts to give the Hornets the 20-14 with 32 seconds left in the third quarter.

Like in so many games this season, North Reading dominated the fourth quarter showing that they are probably the best Hornet team in terms of closing games. Bythrow would get his second touchdown of the game, this time on the ground with 17 yard run. They went for the two point conversion and got the two points thanks to great run to left by Merullo.

McCarthy would add the cherry on top the playoff sundae with a 56 yard run for the hat trick of TDs. O’Donnell extra point was good to complete the 35-14 win.

McCarthy is simply money. He ran for an astounding 351 of the 371 yards rushing for the Hornets, good for an average 14 yards a carry. It seems every time they needed a big run for the Green and Gold, he’s delivered and more. He also added his third interception in as many weeks to boot.

The 8-1 Hornets have another challenge as they move on to play  undefeated Marblehead, who beat Gloucester last week to 41-26. The winner wins the Division 3A North Playoff and will play the winner of Division 3A South in Gillette Stadium in Foxboro the week after Thanksgiving. Kickoff is in Marblehead at 7 p.m.