Hornets remain in hunt for States at 5–5–2 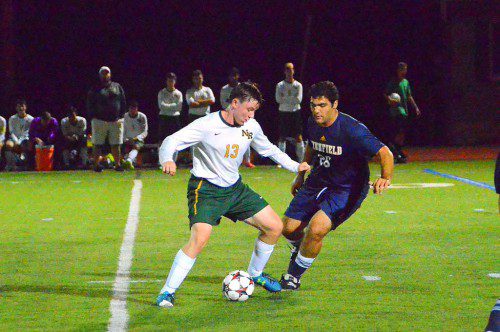 NORTH READING — The Hornets returned to the road on October 11 and tied the Hamilton–Wenham Generals, 0–0. Senior Liam Rutherford made three saves to earn his fifth shutout of the season.

The game proved physical throughout. Play was even for most of the first half, but the Hornets had the best scoring opportunities from senior Cam Davis and senior captain Anthony Tramontozzi but each chance was ultimately saved by the Generals goalkeeper. The halftime score was 0–0.

The second half was very similar to the first. The Hornets got the best scoring opportunity when they were awarded a penalty. Unfortunately, the 6 ft. 5 in. Hamilton–Wenham keeper guessed right and saved the Cam Davis penalty kick that was headed for the bottom corner.

Down the stretch Rutherford made a couple of good saves and the defensive midfield of Tramontozzi, seniors Pat Davis and Griffin Elis contained the talented Generals midfielders to preserve the scoreless tie.

The CAL Kinney Division leading Masconomet Chieftains downed the Hornets 3–1 in their matchup on Thursday night. Cam Davis scored for North Reading and Anthony Tramontozzi picked up an assist.

The first half went back and forth. But Masco got on the scoreboard first in the 17th minute scoring off of a cross after a failed North Reading clearance. After the Chieftains’ goal they were still applying pressure but Rutherford made a couple big saves to keep it a one goal game.

Finally in the 31st minute the Hornets scored. Tramontozzi carried the ball to the right side and sent a long cross to Cam Davis at the far post. Davis positioned himself inside of his defender and beat the keeper to the cross. He finished the ball cleverly just inside the right post and the game was tied. The game remained 1-1 at the half.

In the second half Masco came out with a new game plan and took control of the game. The Chieftains consistently attacked the Hornet net. They went on to score two goals and cruised to victory.

The Hornets, who are still very much in the hunt to make the MIAA tournament, play three important games this wee: On Wednesday, Oct. 19, they traveled to Pentucket to take on the Sachems at 3:45 p.m. The boys are at home on Friday, Oct. 21, when they will take on Triton Regional at 4 p.m. And on Tuesday, Oct. 25, the boys will travel to Lynnfield to take on the Pioneers at 3:45 p.m.