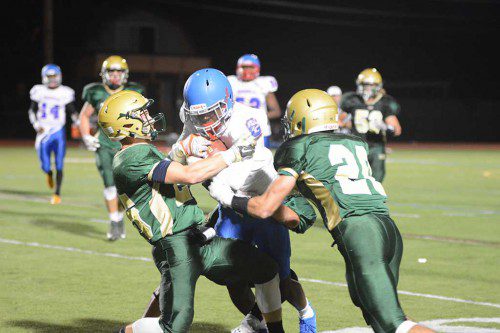 NORTH READING — The North Reading football Hornets have started their season 3–0 for second straight year as they defeated the Somerville Highlanders 41–22, (whom they beat last year to improve to 3–0 as well) last Friday night at the Arthur Kenney Field.

North Reading again dominated thanks to the power running game of senior captain Matt McCarthy as he rushed for 176 yards on only 10 carries and a significant contribution from junior quarterback Kyle Bythrow on the ground as he ran for 75 yards on only five carries. Hornets Head Coach Jeff Wall is running out of laudatory things to say about his star running back.

“He’s a great athlete, he’s one that you get once in a lifetime in coaching,” said Wall. “We expect great things from him but it helps that he has a great line and a great athlete for his fullback in John Merullo, both of which make key blocks for him.”

The Highlanders got the ball first but could only muster 15 yards on six plays, so they had were forced to punt. Even then, they could get the ball to the their own 47 yard line. The Hornets then took advantage of this great field position and scored on the very first play on offense, a jaw dropping 47 yard touchdown run from McCarthy. The extra point was missed so it an early 6–0 lead for the Green and Gold. 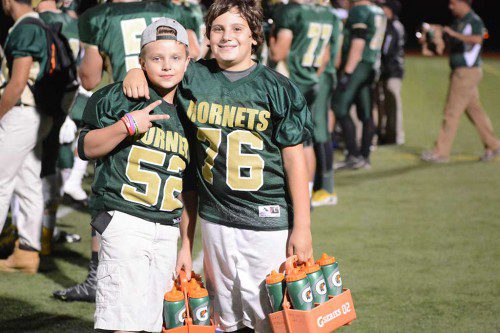 WATERBOYS Jack O’Donnell, (left), and Owen Delano give the football Hornets an edge whenever they take on their opponents. They boys wear the jerseys of their big brothers, Bob O’Donnell and Drew Delano, who play for the varsity. (Bob Turosz Photo)

The Highlanders fumbled the ensuing kickoff, which was recovered by senior captain Bobby O’Donnell to again give North Reading great field position at the Somerville 35 yard line. It only took the offense three plays to make it into end zone as McCarthy finished the short drive with a 15 yard run. O’Donnell finished what he started by hitting the extra point giving the Green and Gold a 13–0 lead after only running four plays in the game.

The Highlanders would answer with a quick drive drive of their own, scoring on the very first play of the second quarter, on a touchdown run by from a yard out. The extra point was made and the Somerville was in the game, trailing 13-7.

The Hornets got it back to a two score game on the very next drive again thanks to McCarthy’s third touchdown of the first half and a O’Connell’s extra point to give the Hornets a 20–7 lead.

The Hornets lead would increase to 28–7 on their next drive finished up by Bythrow helping his own cause with a 9 yard dash into the end zone. This time the Green and Gold went for the two–point conversion and made it on a McCarthy rush.

Somerville would get on the scoreboard one more time before the first half expired, this time from 12 yards out. With the extra point it was North Reading 28, Somerville 14 at the half.

The second half started much like the first half as McCarthy received the kickoff at his own 17 yard line and went the distance into the end zone for the fourth time in the game. O’Connell hit the extra point and it was 35–14 North Reading, 13 seconds into the second half.

McCarthy would find his way into the end zone a fifth time on the next Hornets’ drive, an amazing 54 yard run by the senior captain. The extra point went wide right but North Reading had a commanding 41–14 lead.

Somerville would add a late touchdown but it was all Green and Gold that night.

“I’m proud of them, we came into the game saying that we don’t have to play a perfect game, we just had to give them our best,” said Wall. “We played well in all three facets of the game and in fact with beat them all three areas of the game.”

The Hornets will back at it tomorrow night in Boxford as they will take on the always tough Masconomet Regional High School. North Reading last season beat the same Masco team in highly competitive contest 14–13 for the first time in years. This game has a potential being another classic. Kickoff is at 7 p.m.