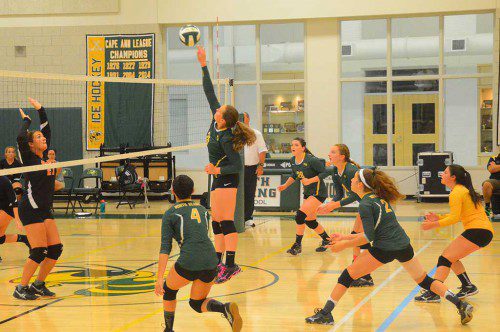 MIDDLE HITTER Noel Riley spikes the ball against Ipswich as her teammates are ready for a return. From left: Abby Paine, (4), McKayla Murphy, (2) and Libero Jenna Forcellese. (John Friberg Photo)

NORTH READING — On Monday afternoon, the North Reading High volleyball team was edged, 3–2, by host Peabody in a very competitive match. With the non-league defeat, the Hornets record dipped to 3–5.

“It was a heartbreaker,” acknowledged Hornets head coach Mike Milone. “We played some of our best volleyball of the season. We passed and set the ball well but we were not able to kill it enough.”

Taylor Moore had two blocks and eight kills while Nicole Shedd had a team-high 10 kills. Abby D’Orlando led the team in assists as the 11th-grader had 21. She also had five service aces.

Jenna Forcelese led the team in digs with a season high 37.

On Sept. 21, the Hornets defeated visiting Georgetown–Pentucket, 3–0, to go to 3–3 in the Cape Ann League.

“We were able to dictate what happened,” recalled Milone. “We played very consistently, which has been our problem sometimes this year.”

Moore had nine kills and a block while D’Orlando had 15 assists. Abby Paine had five service aces while Forcelese had 17 digs.

Next Monday, the Hornets visit Lynnfield. Two days later, they host Hamilton–Wenham. Both of those matches start at 5 p.m.

North Reading is looking to split the season series against both teams.