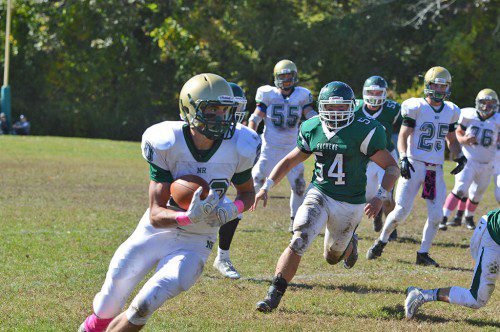 WEST NEWBURY — The North Reading Football Hornets started the 2015 season off with an impressive 4–0 record, including convincing wins over the Hamilton–Wenham Generals and the Masco Chieftains, but the team came down to earth a bit last Saturday afternoon in West Newbury losing to the hosting Pentucket Sachems 28–6.

After the great start and a humbling loss, North Reading Head Coach Jeff Wall hopes this will be learning lesson for his team.

“Pentucket is a good team and we knew it coming in,” said Coach Wall. “They beat us in all three aspects of the game. I told the kids not to let this single game define us a program. We will learn from what we did wrong, improve and then progress forward and we’ll become a better team for it.”

Both teams started off slowly on offense and the first score of the game was not by either offense – it was a punt return touchdown by Pentucket senior Kiernan Haley from 60 yards out and a Stevie Johanson extra–point to give the Sachems a 7–0 lead with just 28 seconds into the second quarter. This was the first touchdown the Hornets gave up on special teams all season.

Just before halftime, Pentucket would increase their lead to 14–0 lead thanks to a 30 yard touchdown by Haley, this time on offense, and Johanson nailed the extra point with just 57 seconds left in the second quarter.

The Green and Gold made a game of it by getting on the scoreboard on their second possession of the second half with an impressive 15 play, 54 yard drive concluding with a Matt McCarthy touchdown from a yard out but the extra point was blocked so North Reading trailed by 8 points, 14–6.

McCarthy had a good game despite the big, strong and quick defense that Pentucket is fortunate to have, as he fought for 109 all purpose yards including 82 yards rushing and 27 yards receiving.

The McCarthy touchdown would be closest the Hornets would get as Pentucket would tack on two fourth quarter touchdowns to complete the 28–6 victory.

Despite Pentucket’s obvious advantage over the Hornets in size, North Reading made the Sachems fight for every yard they gained. Senior Nic O’Connell led the team with 12 tackles, elevating his total to 61 over the first five games. Juniors Tommy McHugh and McCarthy both had seven on the day and classmate Bob Donahue registered five, (three solo, two assists). Senior Nick Copelas picked his opponent’s pockets on an interception that was a thing of beauty on a deep pass route and had two tackles before being hurt in the fourth quarter. He is expected to play Friday night against Triton.

“We just got punched in the mouth,” said Coach Wall. “Hopefully our kids will have a wakeup call and I know they were thinking championship but you have to put in the work in too. I’m hoping we’ll learn from our mistakes and progress for our next game.”

That next game will be against the Triton Regional Vikings tomorrow night at 7 p.m. at the Arthur Kenney Field. The Vikings are 3–1 overall and 2–1 in the Cape Ann League Kinney division and with the Hornets being 4–1 overall and 1–1 in the Kinney division, this game should decide who’s in the state playoffs and who has chance to share the division title with Pentucket.