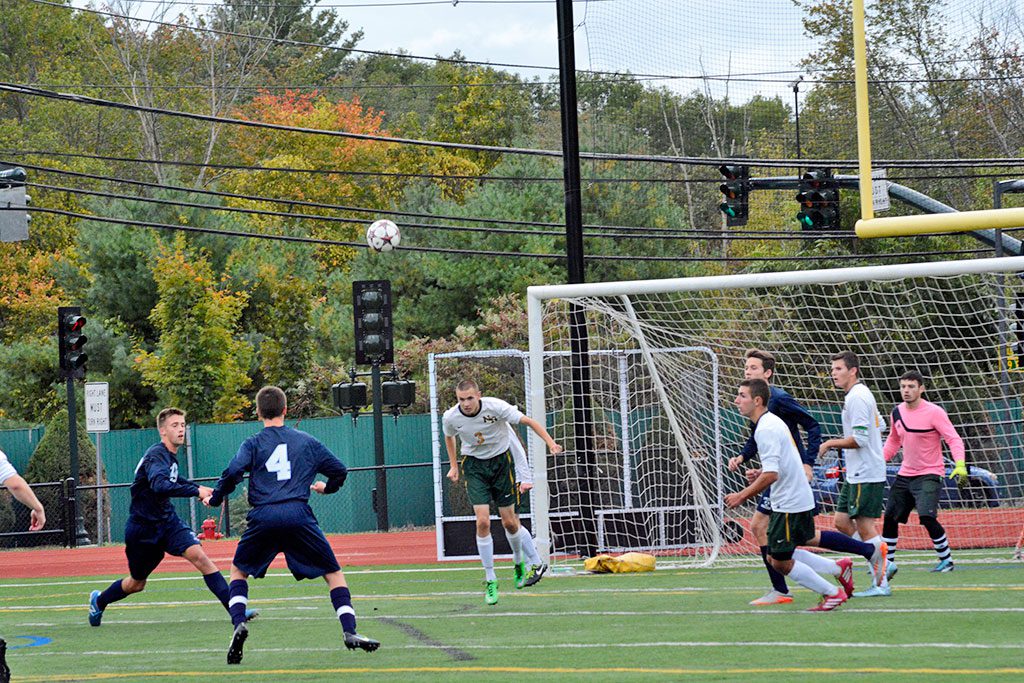 SENIOR Matt Ashness clears the ball in another strong defensive 4 to 0 shutout over the Triton Vikings in the first of three games last week. (Deanna Castro Photo)

Senior Killian Daly quickly got the Hornets on the board with his goal in the fourth minute. The rest of the first half was back and forth, but neither team could finish their chances and the lead was 1–0 at the half.

The offense got rolling with three goals in the second half. In the 44th minute sophomore Nick Carpenter extended the lead with his first varsity goal on a rocket inside the near post. Cam Davis added insurance goals in the 65th and 78th minute and the Hornets cruised to victory.

The game started off poorly for North Reading. Rockport scored goals in the 14th and 23rd minute and jumped out to a 2–0 lead. But after a timeout things turned around for the Hornets. In the 37th minute junior Anthony Tramontozzi served a great corner to Daly who headed it home to cut the deficit to 2–1 at the half.

The offense caught fire and controlled the second half. Early in the half Tramontozzi won a battle for a loose ball in front of the net and slid the ball to Cam Davis for the tying goal. In the 68th minute Castro put North Reading ahead for good when he followed the rebound from a Cam Davis shot and finished off the game winner.

The Hornets extended their point streak to seven with a scoreless draw against a strong Hamilton-Wenham squad on Thursday afternoon. Billy Brandano recorded his seventh shutout of the season.

It was a defensive battle in the first half, but the action heated up in the second. In the 62nd minute junior Jenson Kaithamattam sent a great cross into the box but the General defender just barely beat the Hornets to the ball and tipped it back to the goalie for the save.

Hamilton–Wenham’s best chance came in the 72nd minute, but fortunately Brandano stretched to save the blistering rising shot. The Hornets had two glorious opportunities late but the Generals keeper punched a free kick wide and robbed North Reading on a point blank shot.