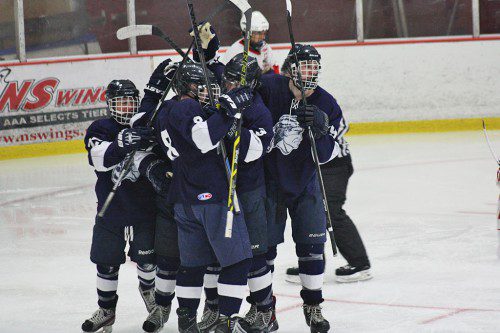 THE HOCKEY TEAM had plenty of reasons to celebrate after the Pioneers defeated Pentucket-Georgetown 4-2 on Jan. 10. (Dan Tomasello Photo)

The Pioneers defeated Pentucket-Georgetown 4-2 on Jan. 10.

Assistant captain Dan O’Leary scored a power play goal 12:28 into the first period, assisted by juniors Jack Ganter and Derek Crampe. But the Sachems tied the game at one with 1:29 remaining in the first period.

The second period was a defensive battle between both teams. While the Pioneers had a number of chances to score, the locals were unable to find the back of the net and the game was deadlocked at one after two periods of hockey.

Freshman Cooper Marengi gave the Pioneers a 2-1 lead at 12:09 in the third period, assisted by junior Rob LoConte and Crampe. The Sachems tied the game at two after scoring a power play goal at 9:16 into the third.

With their backs against the wall, the Pioneers regrouped and played well down the stretch. LoConte broke the 2-2 tie when he scored on a breakaway with 4:52 remaining in the game. Seniors Nick Davis and Brent Donovan were credited with an assist.

Freshman Tyler Murphy scored the locals’ fourth goal on an empty-netter with 46 seconds remaining in the game, assisted by Ganter and O’Leary.

“We told our guys this was a must win game,” said Lynnfield head coach Jon Gardner. “We carried the play for most of the game but we missed a number of chances. But it’s a win and we’ll take it.”

The Chieftains took a 2-0 lead with 2:49 remaining in the second. The Pioneers had a chance to cut the deficit to one late in the second on a breakaway from the red line but the locals were unable to cash in.

“We played a real strong game,” said Gardner. “Masco’s coach (Andrew Jackson) was complimentary of our players after the game. It was a good effort but you are not going to win games 1-0. We have to cash in on our chances.”