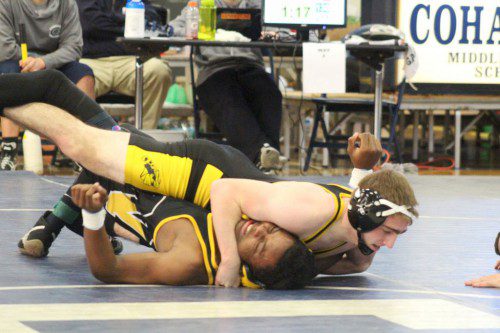 The Black and Gold finished with 167 points. Hanover finished second with 142 points. Tri-Country finished third with 131 points. The co-op team had 12 out of 14 wrestlers place during the tournament.

Senior Jake Mullin-Bernstein won his first varsity tournament after placing first in the 132 lbs. weight class. Mullin-Bernstein defeated Hanover’s Damien Galotti, a returning sectional place finisher, by a 10-1 decision in the finals. He defeated a Norwell wrestler by fall in 2:52 and defeated a Tri-Country wrestler by a 3-0 decision in the first two rounds of the Cohasset Tournament.

Senior Brandon Troisi was crowned champion of the 285 lbs. weight class and won his second straight tournament this year. He defeated a Tri-County wrestler by a 9-2 decision in the finals. He also pinned a Holliston wrestler in 23 seconds and defeated a Nauset wrestler in the first two rounds of the tournament.

Junior Max Whyman finished second in the 126 lbs. weight class. He pinned a Nauset wrestler in 13 seconds in the first round of the tournament. He also defeated a Cohasset wrestler by fall in 2:30. Whyman fell to Holliston’s Goldberg, a returning state place finisher, by an 11-5 decision in the finals.

“It was a two way battle throughout the tournament between us and Hanover,” said Stone. “Each team placed six wrestlers into the finals. Before the final round began, we held a 21-point lead and was able to maintain that through the round. However, the potential for Hanover to win the championship was there if we did not wrestle as well as we did in that round.”

The Black and Gold pounded Wakefield 47-27 on Wednesday, Jan. 7, improving the grapplers’ dual meet record this season to 13-2.

The Warriors jumped out to an early 6-0 lead before the Black and Gold won seven straight weight classes to take a 38-6 lead.

The Black and Gold host Watertown on Wednesday, Jan. 14, beginning at 7 p.m. The grapplers will face off against Triton, Melrose and Southwick in a quad meet on Saturday, Jan. 17, beginning at 10 a.m.

If the Black and Gold defeats Triton on Saturday, the locals will win the Cape Ann League championship.