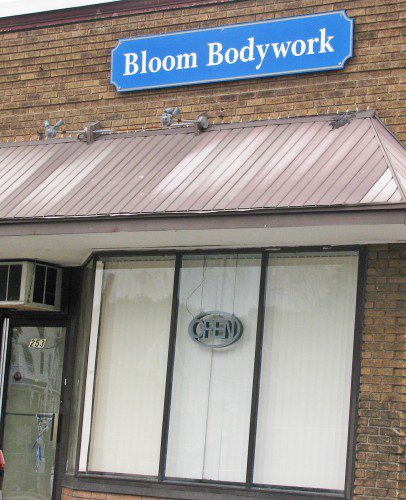 BLOOM BODYWORK at 253 North Ave. was closed yesterday, one day after a 51-year-old woman there was arrested for offering sex for a fee. (Mark Sardella Photo)

WAKEFIELD — It’s no longer just an issue discussed on social media.
The growing number of massage or “bodyworks” operations in Wakefield that are believed to be fronts for prostitution activities is now in the crosshairs of both the Board of Selectmen and the Board of Health. Both boards discussed the issue at their respective meetings this week, and Town Administrator Stephen P. Maio has pledged the full support of law enforcement and other town resources in the effort to rid Wakefield of these types of operations.
Maio spoke to both the selectmen and the Board of Health this week about the issue. He noted that the police have conducted several raids recently including one on Monday at a bodyworks establishment called “Bloom” on North Avenue. One arrest was made in that case and a large amount of cash was confiscated.
But Maio inserted a note of caution for both boards as well as the public.
“We can’t assume that all Asian bodyworks establishments or massage parlors are practicing illegal activities,” Maio said. “We can’t assume that all of them aren’t licensed because there are some that are (licensed) from the state.”
Maio said that prior to the state taking over regulation of massage facilities in 2008, the local Board of Health was able to effectively regulate local establishments. But when the state took over, Maio said, it left a loophole whereby certain types of massage, including Asian bodyworks, were left out.
Health Director Ruth Clay confirmed last night that local health departments used to regulate all types of massage therapy and Wakefield had a solid set of regulations in place to do so. In 2008, however, the state legislature decided that it would regulate massage therapy. But the state law exempted several types of “Asian bodyworks” therapies.
When the state took over in 2008, the Board of Health repealed its local regulations.
Clay recommended that the board re-instate its old massage regulations and look at ways to tweak and add to those regulations in light on current circumstances.
The Board of Health decided last night that it will look at reinstating its old regulations for those types of bodyworks and massage therapies not regulated by the state. Between now and the board’s July meeting, Clay and board members will look at ways to tweak the old regulations.
Clay said that one problem with developing and applying such regulations is that there are several types of therapies that come under the heading “bodyworks” and English language documentation of educational and certification requirements for practitioners can be difficult to find.
Clay said that she will research other communities to see if others have regulations that include educational requirements and professional standards.
The board felt that by reinstating and enforcing the town’s old regulations, it would all but eliminate the illegitimate establishments offering illegal services. But Clay stressed that the local Health Department can only regulate those types of massage that the state is not regulating. She also pointed out that prostitution is a criminal act and is a different issue than public health.
Several residents spoke during public participation at Monday night’s meeting of the Board of Selectmen including Kathleen Tatro, a licensed professional massage therapist who practices locally and is also a Wakefield resident. Tatro also attended last night’s Board of Health meeting.
Tatro said that she remembered the old local regulations and said that they were welcomed by legitimate massage therapy facilities. She told both boards that she would appreciate any action to get rid of the establishments engaging in illegal activity.
Other residents also told the selectmen of their concerns over these businesses.
Michelle Penta asked Maio about reaching out to landlords that rent to these questionable establishments.
Tracy Shea pointed out that several of these operations have sprung up near dance schools and ball fields where children are present.
Rada Frohlichstien said that she was concerned at how many such businesses there are in town. She said that it was clear which establishments were offering illegal activities.
Selectman Brian Falvey called the emergence of these types of illicit activities in town “despicable.” He suggested threatening landlords who knowingly rent to businesses offering illegal services with civil forfeiture of their property.