In a flash, tourney run ends for girls’ lax

Lightning ends in a 15-8 loss against Ipswich 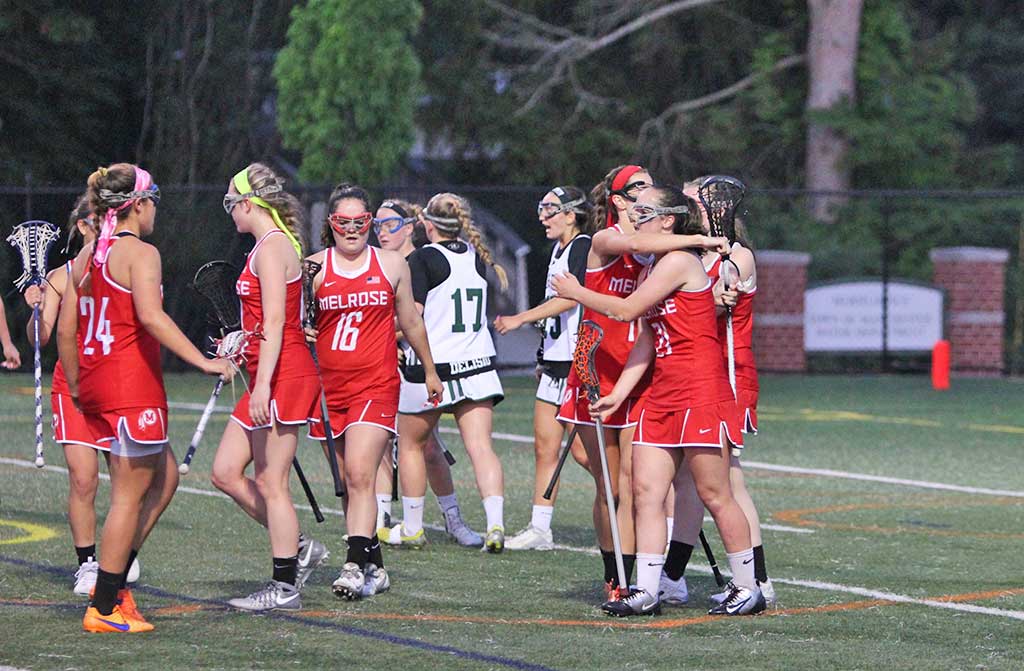 MELROSE — The Melrose Lady Raider lacrosse team made history in their Div. 2 North playoff run, advancing to third round of playoff for the first time in Melrose’s less-than-decade old program. The team shocked No. 2 seed Manchester-Essex, 10-9, on Saturday, June 4 to advance their their first ever semifinal appearance, but good things come to an end and unfortunately for Melrose they had to contend with a strong Ipswich and even stronger Mother Nature appearance on Tuesday night at Peabody High when lightning ended the game in a Melrose loss of 15-8. Officials called the game as a thunderstorm moved in with 4:00 left on the clock and Melrose facing a 7 goal deficit.

The loss ended a very strong season for Melrose, who finishes 13-6 on the season, thanks to securing two playoff wins against Swampscott (6-5 on June 2) and Manchester-Essex (10-9 on Sat. 6/4, see accompanying article).

Melrose had to contend with a surprisingly tough Ipswich squad, spearheaded by an offensive performance of Julia Glavin who scored half a dozen goals for the Tigers, who entered playoffs with a similar 11-5 record as the Lady Raiders. Melrose also had to battle a very tough goalie in junior Emily Martineau, who denied Melrose’s furious second half offensive bid with over a dozen saves at the net.

Leading on offense for Melrose was Hayley Rodriguez with three goals, Lily Cunningham with two and goals from Haley Mate and Leonora Ivers. Rodriguez and Cunningham put Melrose on the board first during a tight opening stanza, in which Melrose and Ipswich traded goals. Haley Rodriguez tied it up 3-3 at the 14:00 mark. After Ipswich took a 5-4 lead, Melrose’s Lily Cunningham narrowed it with a goal to make it 5-4. A free shot by Ipswich’s Emma Moulton increased the Tiger lead to 6-4, while a fluke goal out of the netting of Melrose goalie Sarah Foote, make it a 7-4 game. Melrose defense struggled as the minutes drained from the first half and Ipswich took a 12-4 lead by halftime.

Melrose relied on an energized performance of Haley Mate who pressed through Ipswich defenders for an unassisted goal to make it a 13-5 game. Mate, along with Baraw and Rodriguez,  proved the toughest offensive weapons for Melrose but ultimately could not penetrate through a tough Martineau at the net for Ipswich. But Melrose’s Abby Cunningham scored back to back to make it a 14-7 game while Rodriguez scored to narrow it to 14-8 with four minutes left. The Tigers scored again just as an approaching storm and several lightning strikes flashed in the distance, forcing officials to call the delay, but as weather deteriorated and with only minutes left on the board, the game was called off. It ended in a 15-8 loss for Melrose.

Senior captain Haley Mate wraps up a stellar high school career. The team’s leading scorer has been recruited and will play at Westfield State under the guidance of coach Jeff Pechulis. Teammates Haley Rodriguez and Katey Baraw are also Lady Raiders who can be credited for turning the entire girls’ lacrosse program around with their coach Cate Arkins. The two have 4 years of varsity experience under their sticks and a deep playoff run behind them.