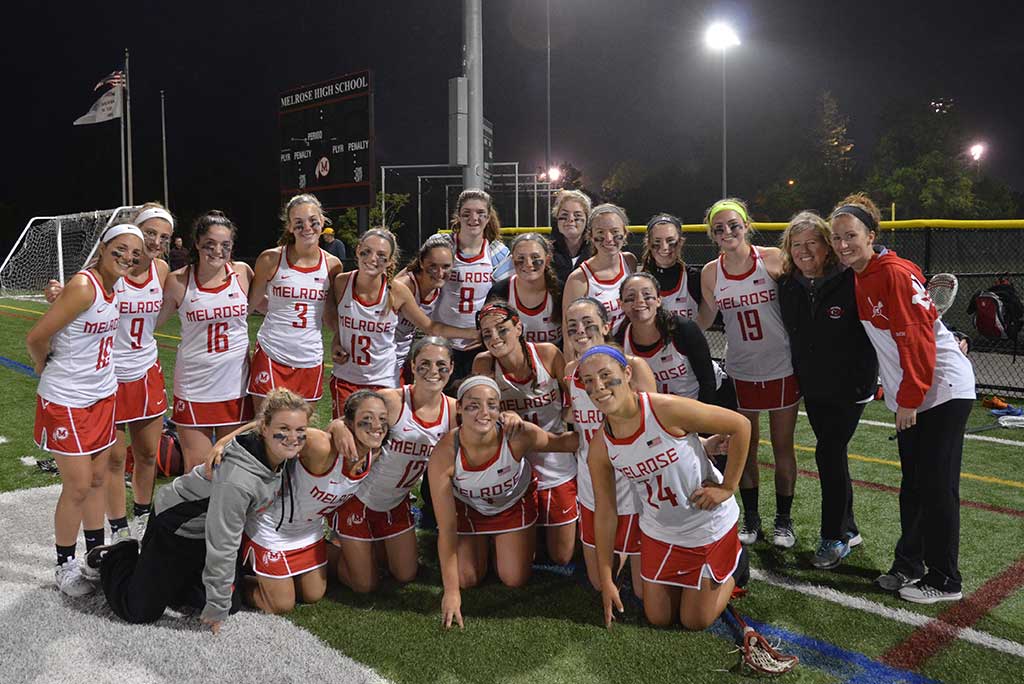 THE MELROSE girls’ lacrosse team upset #2 Manchester-Essex on June 4 prior to competing in Tuesday’s season-ending game against Ipswich. They are pictured here celebrating a playoff win. (courtesy photo, Doug Baraw)

MELROSE — The Melrose High girls’ lacrosse team launched an impressive battle in the first week of Div. 2 North postseason play, earning back-to-back wins to advance to semifinals and knocking out Number 2 seed Manchester-Essex on Saturday, June 4 at by a score of 10-9 on the road.

The victory was a stunner for local lacrosse fans and a personal best achievement for the Lady Raiders (11-5), who entered the Div. 2 North as a seventh seed against a powerhouse M-E team, ranked second at 16-2. It also represented a revival for Cate Arkins’ squad, who earlier in the season opened undefeated. According to the coach, Melrose defense on Saturday made the real difference against the Hornets. “It was definitely a nail-biter and one of our best games of the year. Sarah Foote was outstanding at the net, aggressive out of the crease with 14 saves.”

Melrose opened the game at 1-0 at the 18:16 mark and never lost the lead. By halftime they led 6-2 and later in the game 6-4. The Hornets threatened in the later half, making it a true nail-biter by closing the gap. Says Arkins, “They were very physical and moved the ball well. It’s possible they underestimated us coming in. When we scored first, you can see a little spark come out of them but they made our defense work on our end of the field.”

The win came on the heels of a 6-5 opening round victory over Swampscott on Thursday, June 2 at Fred Green Field. Rachel DiFraia and Haley Rodriguez had late game goals to keep Melrose ahead 6-4 before Swampscott’s Maggie Digrande scored with just over two minutes left in the game to threaten Melrose at 6-5. Lady Raider defense shut the door on the Big Blue, with Melrose’s Abby Cunningham helping to force turnovers, keeping the ball in Melrose’s hands and allowing the clock to expire to victory.