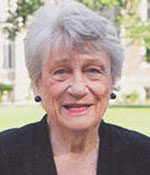 NORTH ANDOVER – “Long after we are too big to carry in her arms, a mother carries us in her heart.” And that’s what Irene O’Neil Sullivan did for her entire life.

Widowed in 1976 when she was just 48 Irene decided to follow in her father’s footsteps and went to real estate school and became a licensed Realtor a year later. She supported herself and her family and worked her entire career at Century 21 Greer’s in Wakefield. It was a job she loved and was really good at and she loved the people she worked with just as much.

She was especially proud of being a past-president of the Eastern Middlesex Board of Realtors.

Irene (Emerson) O’Neil Sullivan was born in Boston on Nov. 11, 1927, a daughter of the late William and Ellen (Gahen) Emerson and was raised in Malden. She was 89 when she died on Monday, Nov. 28, 2016 at Brightview in North Andover following a period of declining health.

After graduating from Malden High School she went to work at the Massachusetts State House and in 1948 married her sweetheart, Medford native James E. O’Neil, a handsome soldier she’d met who’d served with General George S. Patton’s Third Army from North Africa to Germany during the war.

Following their wedding Jim took a job with Domino Sugar Company and they lived in Malden and in Wakefield before his job took their young family in 1956 to Baltimore where the company operated a massive refinery. Thirteen years later another move was made to Franklin Lakes, N.J. while Jim was assigned to the company’s headquarters in Manhattan and a few years later a final move brought them back to Massachusetts where they settled in Lynnfield.

Irene will long be remembered as being warm, loving, kind and generous to those who knew her best . . . fiercely loyal and dependable to those who relied on her . . . and a woman who never let an opportunity pass by to lend a smile and a helping hand to a stranger in need of both.

After Jim’s death God brought a widower by the name of Edward J. Sullivan into Irene’s life and the couple were a wonderful match. They married in 1991 following a courtship and after retirement the pair lived in West Yarmouth before returning to live in Reading in 2004. Irene was widowed a second time following Ed’s death in 2009.

Family and friends will honor and remember Irene’s life by gathering for calling hours in The Joyce Funeral Home, 245 Main St. (Rte. 20), Waltham on Thursday, Dec. 1, from 4 to 8 p.m. and again at 9:30 a.m. on Friday morning before leaving in procession to Saint Theresa Church, 63 Winter St., North Reading where her funeral Mass will be celebrated at 11 a.m. Burial will follow in Forest Dale Cemetery, Malden.