It’s more than a nice ride for Steve Ulwick 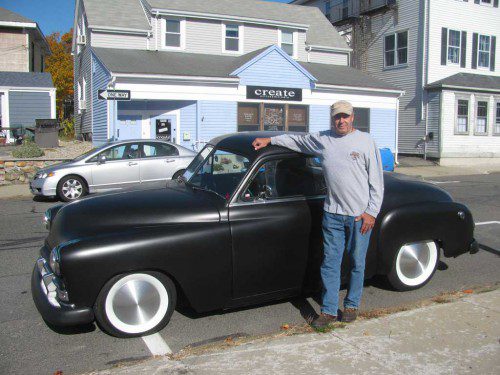 WATER STREET’S Steve Ulwick and his “new” 1950 Plymouth coupe and the one he had fifty years ago. (Mark Sardella Photo) 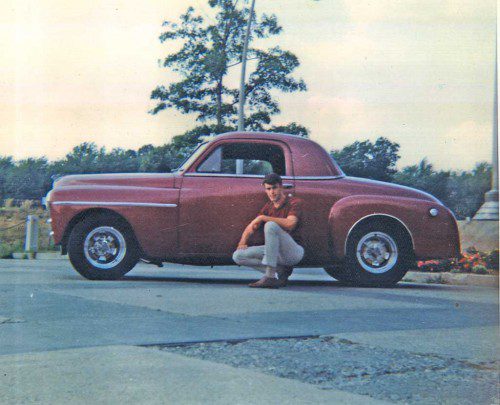 WAKEFIELD — The memories came flooding back. They were of a simpler time, a cooler time, a time of youthful zeal. Steve Ulwick sat in the hot rod he bought

last week and soaked them all in.

Ulwick’s jet black 1950 Plymouth business coupe is awesome. It has a little detailing on the trunk and at the front fenders but other than that it is all black with whitewalls and a gray interior. The bench seat is gray cloth and fits two, with no room for anyone — or anything — else. His Plymouth has a 350 Chevy engine and screams when the time calls for it to really move.

It sat outside our Albion Street office Monday morning and turned heads as Ulwick popped the hood and let us have a look. He won’t say how much he paid for his latest hot rod — a personal matter, he says — but Ulwick opens up about what owning it means. And of a period getting farther and farther away in the rear view mirror of life.

It was a time when car guys chopped vehicles and made hot rods. It was before Hollywood put out American
Graffiti and waxed nostalgic about summer nights, drag racing and what young people did in an era unfamiliar with sitting inside playing computer games all night long.

The coupe Ulwick bought last week is the same type he bought and customized back in the 1960s, one which was captured in a Sept. 24, 1965 Item photograph called “A Cool Coupe.” The caption read: “Good looking rods aren’t too plentiful in Wakefield these days but this one, owned by Steve Ulwick of Water Street, is one of the standouts. Previously owned by Junior High teacher Miss Bernice Bazley, the Plymouth boasts of mag wheels and nerf bars. The outside is a bright maroon; interior is undergoing complete renovation.”

Ulwick sold the maroon Plymouth with the Chrysler Hemi engine sometime in the 1970s. The years passed — as they do — but Ulwick’s love of custom cars was always there, from the time he saw local car customizer Frank Capone’s yellow rod as a young man, getting all kinds of attention as it rumbled along Nahant Street or was parked downtown across from the Atwell School.

Ulwick worked as a teenager at local car dealers Herrick Buick and McManus Ford, so he knew what he was doing when it came to chopping down cars and making hot rods.

One recent day Ulwick went to a car show on Water Street and saw the coupe of his youth, a beauty that had been in storage for 25 years. He couldn’t resist the purchase and said once he got his new rod back home to the driveway, he sat inside it for a good three hours thinking about the past.

In those memories was Benson’s Restaurant, a downtown restaurant located where the recently shuttered Ristorante Molise once plied its trade. Benson’s would have been a great American
Graffiti setting, with hot rods parked outside along Main Street and sparking other young people’s interest.

Sitting in his late 1950 Plymouth coupe, Ulwick said he thought of the old Venture Car Hop on Route 1, located next door to what is now the Continental and Jolly George’s on the other side of the highway. He recalled hitting some pretty good speed on the Lynn Marsh Road and cruising around Richard’s at Wellington Circle, the Big Burger in Cambridge and, eventually, Carroll’s on Route 28 in Stoneham.

When he drag raced, Ulwick often pulled up to a traffic light near the intersection of Route 1 and the Lynn Fells Parkway, waited for the green light and screamed up Route 1 toward the Hilltop. Like all the other memories, this one brought a smile to his face.

Steve Ulwick is 71 years old now but that doesn’t stop Wakefield’s self-proclaimed oldest teenager from conjuring up the past by living in the moment. Wave when you see him in the black Plymouth with the 350 Chevy engine and know it means way more to him than you’ll ever realize.