James Roumeliotis ready to conquer “The Battle of the Bounce” 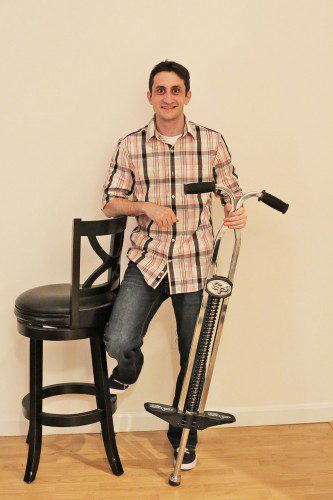 LYNNFIELD — Lynnfield native James Roumeliotis has raised thousands of dollars for scleroderma research while trying to set Guinness World Records with his trusty pogo stick. Roumeliotis is going to try and set a new world record this week for one last time.

The three pogoers will be seeking to break Merza’s current record of 75,005 bounces, which Roumeliotis said will be no easy task.

“This world record does not allow any stoppages or breaks from pogoing,” said Roumeliotis. “There are no bathroom breaks or food breaks. If you fall, you are disqualified.”

Roumeliotis first set a Guinness World Record in Sept. 2007 for Longest Marathon on a Pogo Stick, which featured 186,152 bounces over the course of 19 hours. He set the Longest Marathon record of 206,864 bounces in 21 hours at Pogopalooza in Costa Mesa, California in July 2011.

Roumeliotis said he wanted to break Sexty’s record last year, but was unable to do so because he broke his back. After Merza set the Most Consecutive Bounces record in June, the three pogoers decided to rumble in the Battle of the Bounce.

Now fully healthy, Roumeliotis said he wants to break the world record one last time before he “retires.”

“After I injured my back, it made me rethink a lot of things,” said Roumeliotis, 29. “I know this is going to be the last record I try to break.”

Roumeliotis said it’s going to be a challenge to break the Most Consecutive Bounces record while facing off against two competitors.

“In all of the records I broke, I have always had a target I wanted to hit,” said Roumeliotis. “This time, I am sure we are all going to break the record, but it’s not a race. It’s a marathon endeavor.”

In addition to setting a new world record for Most Consecutive Bounces on a Pogo Stick, Roumeliotis is also raising funds for his non-profit organization Bounce to a Cure. He founded Bounce to a Cure in 2007 while he was a senior in college to raise money for sclerdoerma, an autoimmune disease that mostly affects the skin.

“We are working with the Scleroderma Research Foundation, a non-profit organization which is working with research labs and universities to hopefully find a cure for scleroderma,” said Roumeliotis.

After Roumeliotis officially retires following this week’s Battle of the Bounce, he said he wants to still be involved with Xpogo.

“I would like to team up with people who want to break records to help the Scleroderma Research Foundation or Bounce to a Cure,” said Roumeliotis. “The great thing about this record attempt is the other two competitors are also raising money for causes that are important to them. Records are going to be broken no matter what, but I want to help society by helping others break records.”

Roumeliotis graduated from Lynnfield High School in 2004 and also graduated from Worcester Polytechnic Institute. He got into pogoing when he was eight years old at his grandfather’s cottage, and fell in love of the sport while attending LHS.

“I picked it up in high school when all of my friends started rollerblading, BMXing and skateboarding,” said Roumeliotis. “I couldn’t do any of those, but I could still pogo and I started doing tricks.”

Roumeliotis is currently working for Eliza Corporation as an engineer. While he currently lives in Hudson, Roumeliotis said he is planning on moving back to the North Shore in the near future. He is the son of Gina Gustafson of 68 Crest Road.

If residents want to support Roumeliotis as he looks to break one last Guinness World Record, they should visit https://support.srfcure.org/fundraise?fcid=471828 or https://bouncetoacure.com/donate/.