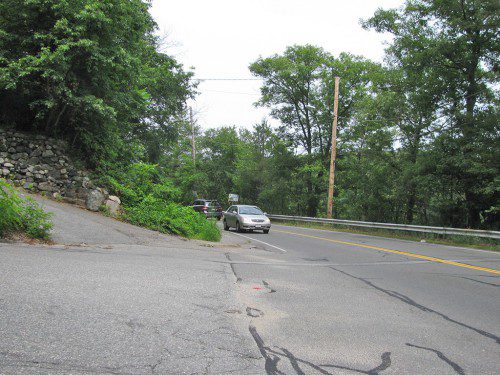 THIS view from a vehicle pulling out of Gianna Drive shows that a mound of earth and vegetation block a driver’s ability to see traffic on Walnut Street approaching from the left. Residents at last week’s traffic meeting told the selectmen that they were worried about a serious accident occurring at this location. A traffic study conducted by the BETA Group concluded that a more intensive engineering review would be required to determine the best way to rectify this problem. (Mark Sardella Photo)

LYNNFIELD — Long wait times at traffic lights, intersection blocking, truck traffic and side street U-turns were just some of the concerns addressed last week at a three-hour-long public meeting to discuss traffic issues on Walnut Street in the vicinity of Lynnfield’s MarketStreet complex.

The Lynnfield Board of Selectmen presided over the meeting, which drew dozens of Lynnfield residents and some Wakefield residents to the Al Merritt Media Center at MarketStreet last Wednesday to hear the results of a traffic assessment done by the BETA Group, an engineering firm out of Norwood. Lynnfield Police Chief David Breen as well as Representatives from the Massachusetts Department of Transportation (MassDOT) and the Lynnfield DPW were also in attendance.

BETA’s study area consisted of a segment of Walnut Street bounded by MarketStreet to the north and Gianna Drive to the south. After hearing BETA’s recommendations, residents had numerous comments and suggestions but the dominant sentiment expressed was the need for more police presence and traffic enforcement in the area.

Ultimately, all three members of the Board of Selectmen agreed that Lynnfield needs a full-time traffic enforcement officer and that funding for such a position should be sought at the October Town Meeting.

BETA’s Vice President Kenneth Petraglia and transportation engineer Justin Curewitz began their presentation by describing their methodology and observations before moving on to their analysis and recommendations.

The three unsignalized intersections are on Walnut Street south of Salem Street at Sparhawk Drive, Bluejay Road and Gianna Drive.

Petraglia and Curewitz said that BETA looked at a number of possibilities for improving traffic signal operations at the three signalized intersections including lengthening intervals for left turn arrows. But BETA determined that none of those measures would improve conditions at those intersections but would instead increase congestion and wait times.

Two other major points of discussion included the problem of U-turns at the end of Sparhawk Drive and sightline problems when turning left out of Gianna Drive on to Walnut Street.

BETA summarized its recommendations as follows:

• Install a raised median island along the centerline of Sparhawk Drive for 50 feet, beginning from the intersection with Walnut Street.

• Replace and add additional signage for the southbound merge on Walnut Street, south of Salem Street. A diagrammatic sign which indicates that the left lane will be dropped, should be installed where the existing “Right Lane Ends” sign is located. A new “Left Lane Ends” sign should be installed southbound on Walnut Street between the intersections of the I-95 Northbound Ramps and Salem Street.

• Install diagrammatic signs with a supplemental “South of Salem Street” plaque for both eastbound and westbound intersection approaches on Salem Street and on the southbound off-ramp from I-95 southbound.

• It would also be beneficial to notify truck operators on Route I-95 before they commit to a ramp that a truck exclusion exists. This, however, would require coordination with MassDOT to receive permission, to determine the locations and to review the sign design.

Petraglia said that solving the sightline problems at Gianna Drive would involve a more intensive engineering study to determine what could be done. But Selectman Tom Terranova and several residents advocated looking into some kind of vehicle-tripped signal at that intersection to improve safety.

A number of residents questioned the timing of BETA’s study in terms of the time of year and times of day that BETA looked at. Many felt that the observations and data collected last winter were not representative of true conditions.

Katy Shea, 7 Daventry Court, noted that the development agreement with MarketStreet states that all advertising and marketing will direct visitors to use exit 43 – Walnut Street in Lynnfield. But Shea wondered if modifying that agreement to allow advertising to also direct traffic to Wakefield’s Exit 42 (Audubon Road) might alleviate some of the congestion on Walnut Street.

But Susan Wetmore of Sunset Drive in Wakefield strongly disagreed. She noted that Wakefield was promised that Audubon Road (Exit 42) would not be a main entrance to MarketStreet. She maintained that too much traffic is already directed to Exit 42 for businesses other than MarketStreet.

Wetmore also complained about the gridlock that frequently occurs on Salem Street between Walnut Street in Lynnfield and the Wakefield line. She noted that residents of her street have only one way out and that is via Salem Street.

Kristen White of Hidden Valley observed that it only takes one accident on Route 128 to “turn Salem Street into gridlock,” leaving residents who live on streets like hers stuck in their driveways.

Much of the meeting was spent discussing the need for a greater police presence and enforcement along the stretch of Walnut Street under discussion. Police Chief David Breen noted that he had already hired as transfers from other police departments two of the four officers that the town had authorized him to hire.

Breen said that one of those officers would be a combined School Resource Officer/Traffic Enforcement Officer. He said that while school is off for the summer, the officer would be able to focus on traffic enforcement along the Walnut Street corridor. But during the school year, Breen said, the officers time would be divided between the schools and traffic.

Several Lynnfield residents pushed for the addition of a full-time traffic officer position and more traffic enforcement in general, arguing that the town could afford it with the tax revenue being generated from MarketStreet.

After some discussion, all three selectmen agreed. They said that funding for an additional officer dedicated solely to traffic enforcement would have to be approved by Town Meeting.

In the meantime, they instructed Breen to fill one of the remaining two vacancies as a transfer if possible, to avoid having to wait up to a year for a new recruit to complete police academy and in-service training.

The full video of the Walnut Street traffic discussion is available at town.lynnfield.ma.us.

The full text of BETA Group’s traffic study is available on the Selectmen’s page on the Lynnfield town website at town.lynnfield.ma.us/Pages/LynnfieldMA_BOS/index.