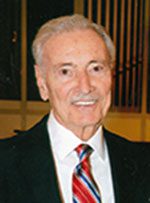 John was born in Middleborough on July 14, 1921 to the late Giovanni and Elisia (Pipi) Bena. He was raised in Middleborough and graduated from Middleborough High School. John was an accomplished violinist, playing in his own band since junior high school. After high school John joined the U.S. Coast Guard and served his country with pride during World War II in both the European Theater and the Pacific Theater, mostly on the USS General Gordon, a troop transport ship.

While in the service, Mr. Bena started a band and played the violin for the three years entertaining the troops during World War II. John was a real estate broker for over 40 years. He owned and operated the John Bena and Company in Arlington for many years. After John retired, he continued to work for Pennell and Thompson Real Estate Company in Arlington.

John was a resident of Stoneham for the past 38 years. He was a past president of the Kiwanis Club in Arlington and the Arlington Chamber of Commerce and was a member of Bellevue Golf Club in Melrose. Mr. Bena was also a member of the Massachusetts Association of Realtors, a member of the Greater Boston Real Estate Board and a founding member of Multiple Listing Service.

John was a dedicated family man; he enjoyed playing bocce and was described by all that knew him as “a true gentleman.” He was the beloved husband of 38 years to Diane (Giovino) Bena. He was the loving father of Peter Bena and his wife Ruth of California; John Bena III of Marshfield; Philip Bena and his wife Brenda of Maryland; and Cynthia Paglia and her husband Mark of Arizona. He was the cherished grandfather of Aletheia, Philip, Alison, Sean, Ryan and Taryn. He is also survived by several nieces, nephews and friends.

In lieu of flowers memorial contributions may be made in John’s name to the Bedford VA Hospital, Attention: G.R.E.C.C. Alzheimer’s Unit, 62cd/music, 200 Springs Rd., Bedford MA 01730. To send a message of condolence please visit www.gatelyfh.com.