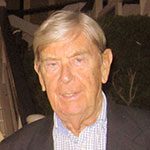 John was born on April 15, 1921 in Boston, one of six children of the late John C. and Ellen (O’Brien) Rice. He was raised in Malden, where he graduated from Malden Catholic High School and later attended Boston Teacher’s College, as well as Northeastern University. John served proudly in the United States Army during World War II, receiving several medals and ribbons for service in the Signal Corps during the European-African-Middle Eastern campaigns. After receiving an honorable discharge, he returned home and married the love of his life, Mary E. Tully, and they settled in Melrose to raise three children.

For 42 years, John dedicated himself to his working career as a Registered Professional Engineer at NYNEX Corp. He retired in 1990 to spend more time with his family and to further enjoy his interests in life.

John had a special place in his heart for Long Beach in Rockport, where the Rice’s had a cottage for years. During the summer, he loved sun bathing on the beach, floating on his back and talking to the many people strolling along the beach. He also enjoyed sailing, playing tennis, fishing and cruising off the coast of the North Shore in his boat, the “Bri-De-Jo.”

His other main passion in life was golf and he enjoyed many years of membership in Melrose at Bellevue Golf Club and in Florida at PGA National. With the Rice home overlooking the sixth fairway at Bellevue, John loved walking the course nightly collecting golf balls to give to friends and family near and far. He was always active, looking for something to fix or repair and took great pride in his homes and gardens. John also enjoyed speaking and socializing with other Army veterans at the Chelsea Soldiers Home.

With a kind heart and humble nature, John was known as the perfect gentleman. He often sought out opportunities to help friends and neighbors in a selfless, unassuming way. John loved his family and cherished the time he spent playing with his grandchildren. John’s quiet strength, dry sense of humor and devotion to his wife, children and grandchildren will live on in the hearts of his family.

Relatives and friends gathered in honor of John’s life during visiting hours at the Robinson Funeral Home, 809 Main St., Melrose on Wednesday, Dec. 17 from 4 to 8 p.m. and again on Thursday morning at 9 a.m. before leaving in procession to the Church of the Incarnation, 425 Upham St., Melrose where his funeral Mass was celebrated at 10 a.m.

For online tribute, guestbook, directions or to share a memory visit RobinsonFuneralHome.com.