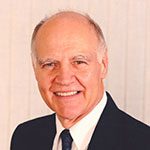 STONEHAM — Russell C. Jenks, 82, a resident of Stoneham and formerly of Melrose, passed away peacefully in Woburn on Saturday, Dec. 13.

Russell was born on March 11, 1932 in Melrose, one of two sons of the late Robert C. and Marion F. (Slocomb) Jenks. He was raised and educated in Melrose where he graduated from Melrose High School. In his youth, Russell enjoyed sailing and received his Liberal Arts degree from the University of New Hampshire.

Mr. Jenks was employed as the personnel director for St. Joseph’s Hospital in Lowell for many years. Later in life, he became a real estate broker in Wakefield for Barrett Real Estate. Originally from Melrose, Russell moved to Reading for a couple of years before settling in Stoneham, where he lived for 35 years.

During his free time, he enjoyed ballroom dancing three times a week. He also loved animals but above all else he was a family man. Russell cherished the time he spent with his family, especially his grandchildren.

Relatives and friends gathered in honor and remembrance of Russell’s life at the Robinson Funeral Home, 809 Main St., Melrose during visiting hours on Thursday, Dec. 18, from 4 to 8 p.m. and for his funeral service celebrated on Friday at 10 a.m.