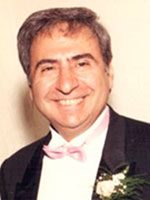 NORTH ANDOVER — John J. Hashem of North Andover  passed away Oct. 17.  He was the beloved husband of Kumok “Kim” (Park) and the late Madeline Hashem. He was the father of John J. “Jack” Hashem Jr.  and his wife Denise of North Andover and Diane Hashem–Thornton and her husband David of North Reading and the step–father of Anthony Fennell and his wife Debbie of North Reading and Kim Woodford and her husband Peter of Wilmington. John was the grandfather of Karl Russo Jr., Nicole, John J. III and Michael D. Hashem and the step–grandfather of Anthony Fennell Jr., and Paige and Tia Woodford. He was the brother of late Frederick and James Hashem and Alice Baddour. John is also survived by many nieces and nephews.

John’s funeral will begin from Cota Funeral Home on Thursday, Oct. 22 at 9:30 a.m, followed by a funeral Mass in St. Theresa Church, 63 Winter St. (Rte. 62), North Reading at 10:30 a.m.  Interment will be Riverside Cemetery, North Reading. In lieu of flowers, donations may be made in John’s name to the Lions Clubs International Foundation, Department 4547, Carol Stream IL 60122-4547. John was a member of the Knight of Columbus of North Reading and the North Reading and North Andover Lions Club. He was a lifetime member of the NRA and past president of the Eastern Middlesex Board of Realtors. John was a gentle kind person that everyone loved and will be missed by all the people that he touched in his life. John also served his country proudly in WWII in the U.S. Navy.