Moved to North Reading to be closer to family 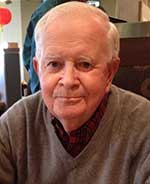 NORTH READING — John S. “Jack” MacDonald, 77, affectionately known as “Grumpy” to his family and many friends, passed away peacefully at his home on the morning of July 23.

Jack and his wife, Cecilia (Berger) moved to North Reading in 2008 to be closer to their family, and they quickly fell in love with the town and its people. Jack could often be seen playing golf at Hillview Country Club, watching his grandchildren at school events, sports fields and dance recitals as well as driving the family dog, Mulligan, around town.

Jack and Cecilia were married in 1963 and resided in Trumbull, Conn., prior to moving to North Reading. They celebrated their 53rd wedding anniversary on July 13.

Born in Ellicottville, N.Y. on Dec. 19, 1938, Jack graduated from Lynbrook (N.Y.) High School and Seton Hall University, which he attended on a track scholarship. He was employed as a small business administrator at Textron, Inc., in Stratford, Conn..