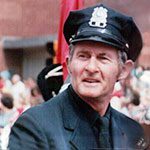 Joe was born in Somerville on April 12, 1923, a son of the late Michael J. Leary and Agnes (Vogel) Leary. He grew up in Malden where he was educated at the Cheverus School and graduated from Malden High School in 1942.

He enlisted into the United States Army on June 14, 1943 and served his country faithfully and with courage during World War II. He was honorably discharged on February 14, 1946 with the rank of Tec 5.

Joe was sworn in as a Melrose Police Officer on October 1, 1951 and retired on January 26, 1988 after 36 years of dedicated service in law enforcement to the City of Melrose.

He enjoyed bowling, attending Saturday night dances with his beloved wife and most of all he cherished the love and quality time he was able to spend with his children, grandchildren and great-grandchildren.

Joe was an avid Boston sports fan and loved watching the Boston Red Sox and the New England Patriots.

Joe was the beloved husband of 69 years to the late Jewell A. (Booth) Leary, who passed away on December 6, 2014. He is the devoted father of Janis Mastrorillo and her husband Roger of Melrose, Stephen Leary of Wakefield and the late Michael Leary. He is the loving Grampy to nine grandchildren and 22 great-grandchildren. He is the beloved brother of Mary Kwitkowski of Chelsea and the late Winifred Nugent, Sr. Louise Leary and Barbara Goldsmith. He is also survived by many nieces and nephews.

His burial was at Wyoming Cemetery in Melrose. Visiting hours were on Monday, September 14, 2015 from 4 to 8 P.M. in the funeral home.