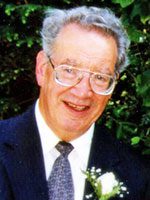 MELROSE — Joseph D. Amara, 84, a longtime resident of Melrose, passed away peacefully surrounded by his loving family on Sunday, April 19.

Joseph was born in Boston on January 24, 1931 and was one of four children of the late Frank and Rose (Ruma) Amara. He was raised in the West End of Boston, graduated from Boston Technical High School, and attended Wentworth Institute. He was married on September 28, 1952 in Boston and lived on Beacon Hill before settling in Melrose to raise two daughters. Mr. Amara enjoyed his working career as a mechanical design engineer at General Electric for 40 years.

In his free time, Joseph’s main passion in life was woodworking and woodcarving. Joe was a skilled woodcarver, and with the sharp mind of a mechanical engineer, he could build anything he set his mind to. He could often be found in his shop, designing or building all types of furniture or wooden objects. His rocking horse was well known, but his family and friends received many desks, hutches, cradles, toys, and bureaus. Joe also had a love for fishing off of Revere beach, opera music, especially anything by his favorite composer Caruso, and enjoyed his war movies.

Raised by his parents and extended family in Boston, Joe was part of a family that cared for one another and had a strong work ethic. His warmth, positive nature, and care for others was instilled in him from a young age. He always had a kind word for people working, and had a special fondness for the workers in the supermarket who he remembered by name. Dedicated to his faith, Joe was an active and well loved parishioner at Incarnation Church. He joined other parishioners with regular volunteering trips to My Brother’s Table in Lynn. Joe was very considerate and compassionate to those less fortunate.

Joe could talk to anyone and endeared himself to many people throughout his life. He was a loyal friend with a ready sense of humor and a supply of one liners to keep his family and friends laughing. He loved spending time with his family at home, never complained and always made others feel good. Joe was a great husband, father, grandfather, and friend and will be lovingly remembered by all who knew him.

Mr. Amara was the beloved husband of Lucy P. (Capone) Amara, with whom he shared 62 years of marriage. He was the devoted father of Cindy L. Amara of Needham; and Debora A. Amara of Portland, Oregon. He was the dear brother of the late Rose Pomodoro, Mary Indorato and Josephine Castro. He was the cherished grandfather of Carmen Levin. He is also survived by several nieces and nephews.

Relatives and friends gathered in honor and remembrance of Joe’s life during visiting hours at the Robinson Funeral Home, 809 Main St., Melrose on Thursday, April 23, and again on Friday, April 24 at 10 a.m. before leaving in procession to the Church of the Incarnation, 425 Upham St., Melrose, where his funeral Mass will be celebrated at 11 a.m. Interment will take place in Woodlawn Cemetery, Everett.