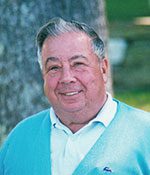 DELTONA, Fla. — Ernest A. Masiello, 88, of Melrose passed away at Fish Memorial Hospital in Deltona, Fla. on April 15.

Ernie was born in Melrose on Nov. 30, 1926 to the late Angelo and Angelina (Bevilaqua) Masiello. He was raised in Melrose, attended Melrose High School and was a lifelong resident.

Mr. Masiello summered at Bow Lake in New Hampshire since 1959 and wintered in Deltona, Fla. since 1976. Ernie entered the U.S. Navy in 1944 and served his country with pride during World War II. He was discharged in 1946.

Mr. Masiello was the president and owner of Crystal Motors in Wakefield since 1952 and on all his trucks he had the slogan, “Behind a rolling ball comes a running child.”  He was a very hard working man who was also very generous with his time.

Ernie was an avid golfer at Mount Hood Golf Course, was a member of the Inner Club at the golf course and was the first person to own a golf cart at Mount Hood, where he helped put in cart paths on the course.

He loved the New England Patriots and was a season ticket holder since 1965.

What stands out most about Ernie is his great smile and huge heart. He loved to cook, loved to eat and loved to feed all his friends and family. Ernie will be sorely missed by all who knew him.

In lieu of flowers memorial contributions may be made in Ernie’s name to Alzheimer’s Association 480 Pleasant St. Watertown MA 02472. To leave a condolence online and for additional information please visit gatelyfh.com.