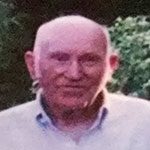 He was born in North Reading on March 15, 1927. He was the son of the late Alexander and Mary (Leszczydsky) McDonald. Chuckie was raised and attended school in North Reading. He was a U.S. Navy Veteran of World War II. He was Seaman First Class and he served from 1944 to 1946.

He was a retired self–employed builder in the Andover and North Reading area for over 50 years. He had been a resident of Brookfield, N.H. for the past 14 years and was a former resident of Andover for 44 years.

Chuckie was a loving husband, father and grandfather. He enjoyed collecting antiques, restoring antique cars and gardening with his wife.

Funeral services will be private. There will be no calling hours. Burial will be in Riverside Cemetery in North Reading. In lieu of flowers memorial donations may be made in his memory to the charity of one’s choice. Arrangements were by the Croswell Funeral Home, 19 Bow Street, North Reading. www.croswellfuneral home.com.