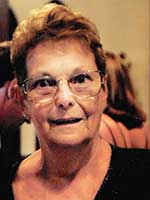 MELROSE — June (Mahoney) Palangi, 86, a resident of Melrose, passed away peacefully surrounded by her family at home on Monday, May 16.

Born in Melrose on June 29, 1929, June was one of two children of the late Joseph L. and Edith W. (Singer) Mahoney. She was raised in Malden where she graduated from Malden High School, Class of 1948.

June was a warm weather person. She loved being in the sun and in the mid ‘70s moved to Grand Bahama Island where she worked as property manager in Freeport. She loved the beach, the warm weather and being away from the cold winters in New England. After 20 years, she moved back to Massachusetts briefly, before moving to Ormond-by-the-Sea, Florida where she lived for another 20 years.

Strong, independent and sociable, June made friends easily but never hesitated to tell you how she really felt. She was outspoken and enjoyed knowing everything going on around her. After moving back to Massachusetts and settling into the Cefalo Apartments, she made some special friends in the building including reconnecting with some old Malden High School classmates. With her free time, she enjoyed knitting, crochet, cooking and was an avid reader. June adored her grandchildren and was happy any time she was with them.

Relatives and friends gathered in honor and remembrance of June’s life for her memorial service at the Robinson Funeral Home, 809 Main St., Melrose on Thursday, May 19 at 10 a.m. Gifts in June’s memory may be made to Hallmark Health VNA and Hospice, 178 Savin St., Ste 300, Malden MA 02148. For online tribute, RobinsonFuneralHome.com.