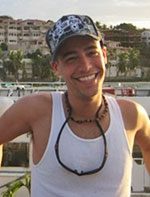 NORTH READING – Keith David Barr – 32, of Peabody and formerly of North Reading, died unexpectedly at his home on Monday, Januray 26, 2015.

Born in Winchester  on September 24, 1982, He was raised and attended North Reading Public Schools and was a graduate of North Reading High School, Class of 2001.

Keith was a graduate of Endicott College in Beverly, he received a Bachelors of Fine Arts in Graphic Design and a minor in photography. Keith worked in the Restaurant Business as a cook and a waiter. He had been a resident of Peabody for the past four years. He was a member of the Messiah Lutheran Church in Lynnfield.

He loved the Boston Bruins and the Boston Red Sox, snowboarding, going to the gym with his buddy Matt Johnson and competing at darts, mountain bicycle hiking, playing his drums and deep sea fishing with his best friend Bobby Monk.

Family members include his loving parents, Gilman A. Barr, Jr. and his mother Gayle A. (Jarvis) Barr of Peabody and formerly of North Reading; his brother Corey Barr and his wife Nicole; his nephew and Godson, Charlie Barr and his niece, Stella Barr, all of Wakefield. He is also survived by many cousins.

His funeral was held at the Messiah Lutheran Church, 708 Lowell Street, Lynnfield on Tuesday, February 3. at 10 AM. . Burial will be in Cedar Grove Cemetery in Peabody. In lieu of flowers memorial donations may be made in his memory to: Learn To Cope organization at NSMC Family Resource Center, 57 Highland Avenue, Salem, MA 01970 or www.learn2 cope.org “In loving memory of Keith D. Barr”. www.croswell funeralhome.com