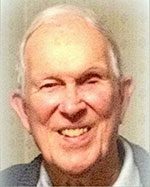 WAKEFIELD — Ken Walker, 90, a resident of Wakefield and formerly of Melrose and Dover, N.H. passed away with honor and dignity, peacefully surrounded by his family on Tuesday, March 24.

Ken was born on May 25, 1924 in Haverhill, and was one of two children of the late Nathaniel K. and Marguerite E. (Currier) Walker. He graduated from Wakefield High School and then attended Wentworth Institute in Boston. On June 9, 1951, he married the love of his life and cherished partner the late Polly G. Walker. They began their life together in Wakefield and moved to Melrose in 1955 to raise their family of three children. Ken worked in automobile sales for many years at Cutler Ford and Tom Ford dealerships. In ‘active’ retirement, they lived for 20 years in Dover, N.H. before returning to their hometown of Wakefield.

Ken enjoyed spending summers in New Hampshire, especially at the summer cottage on Pawtuckaway Lake in Nottingham. He was a member of the Melrose Highlands Congregational Church and both the Wakefield and Dover First Parish Congregational Church. For many years, Ken was an active member of the Melrose Lions Club. While living in Dover, both he and his wife were very active in the local community. In his later years, he enjoyed attending the Saugus Senior Center as well as traveling with family, especially his annual spring trips to Fort Myers Beach, Fla.

Family first was Ken’s mantra in life, he was a gentleman’s gentleman, kind and considerate to any and all he encountered. He was forever selfless and centered all of his interests to that of his family. Along with a passion for tinkering on projects his love of music came back to him later in life. No matter what he was doing, he was always ready to dance, sing, hum, sway or simply keep the beat of the music with the tap of his foot. But most of all, Ken was a family man who cherished the time he spent with his family on their activities.

Ken was the beloved husband of the late Polly, with whom he shared over 60 years of blissful marriage. He was the devoted father of Diane Bucknill of Wakefield; Doug and Dee Walker of Watchung, N.J. and Donna and Bud Dineen of Saugus. He was the devoted brother of the late Joan Walker of Wakefield. He was the cherished grandfather of LyneMarie and Mike Carvill of Worcester, David and Margaret Bucknill of Newbury, Chris Dineen and his fiancée Diane of Wakefield, Jenn and Brian Kohr of Saugus and Greg and Ashley Dineen of Braintree. He is also survived by his granddaughters Jaime and Brianna Walker of Watchung, N.J. He was the loving great-grandfather of Caleigh and Addison Carvill, Julianna and Justina Bucknill, Nicholas Kohr and two more great-grandchildren expected in August.

Relatives and friends will gather in honor and remembrance of Ken’s life at the Melrose Highlands Congregational Church, 355 Franklin St., Melrose for his memorial service celebrated on Sunday, April 12 at 2 p.m. and a gathering on Fort Myers Beach, Fla. on Sunday, May 10. In lieu of flowers, gifts in Ken’s memory may be made to Fisher Center for Alzheimer’s Research Foundation, www.alzinfo.org (click on Donate for the cure), 110 East 42nd St., 16th Fl., New York NY 10017 or to Massachusetts Lions Eye Research Fund, www.mlerfi.org (click on Memorial donation), PO Box 6050, New Bedford MA 02742. For directions, online tribute or to share a memory, visit RobinsonFuneralHome.com.