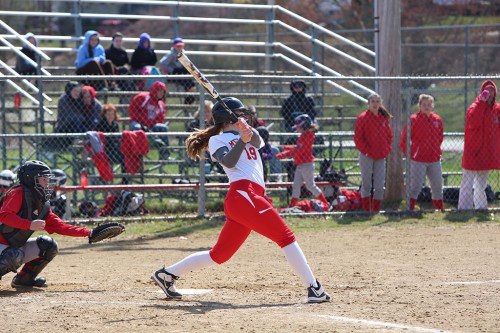 MELROSE — It’s been nothing but smooth sailing for the Melrose High School Lady Raider softball team who punched its ticket to playoffs on Monday, May 18 with an exciting 15-3 win over Winchester, thanks to a grand slam by sophomore Victoria Crovo that helped Melrose improve to 9-7 with four more games on the horizon.

Melrose defense has allowed only 4 runs in two games, with Melrose beating their opponents by wide margins of 15-3 and 14-1 (over Watertown). On the mound, Melrose’s pitchers are getting it done. Alyssa Gorman went the distance against Watertown, limiting them to just one run, fanning 7 and giving up only 3 hits in a game that was called in five innings by the mercy rule. “Alyssa has been consistent all year long,” comments Melrose coach Steve Wall. “And defensively we played a tight game,”

Melrose wasted no time at the plate, exploding in offense in the first inning alone, with Stephanie Crovo and Caitiln Carson leading the charge in hitting, while three Lady Raiders had two hits apiece adding to Melrose RBIs: Megan Tryder, Alyssa Gorman and Stephanie Crovo. “Offensively, we’re getting it done at a great time of the season,” says Wall.

Against Winchester on Monday, Alex McGuire took the mound for Melrose and was as consistent as she’s been all season, giving up just 6 hits. “She always keeps us in games. Alex has a nice change up and fastball,” says her coach. Winchester scored two runs in the top of the first before sophomore Victoria Crovo’s bottom-of-the-first grand slam that put the momentum squarely in Melrose’s corner. “That set the tone,” confirms Steve. Along with Crovo, senior captain Kaitlin Carson had two hits, Saoirse Connolly had two and senior captain Stephanie Crovo had three.

With these kind of bats, Melrose will enter post season on a hot streak. “We have a bit of a layoff before playoffs start in the first week of June,” says Wall. “Our challenge will be to stay focused, scrimmage and prepare for post season.”

In the meantime, Melrose still has ball to play. The team faces two double headers this week against Boston Latin and Malden. “We’re hoping to get some more wins under our belt so to improve our seeding,” says Wall. Melrose gets that chance when they play a double header Saturday against Malden starting at 9 a.m. at Pine Banks.