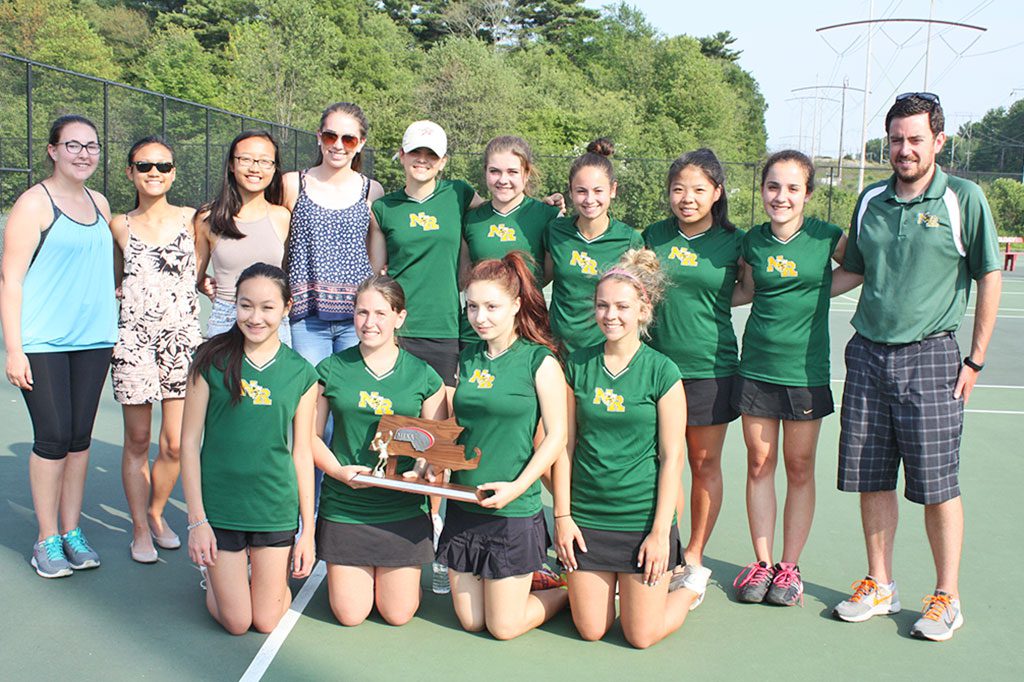 The incredible season of the NRHS girls varsity tennis team came to an end at the hands of the undefeated Lynnfield Pioneers, 5–0, in the Division 3 North Final on Friday. The Pioneers handed the Hornets their only two losses of the season and North Reading finished with an outstanding 16-2 record.

Even with the tough end to the season Head Coach Matt Finn praised his team. “I am incredibly proud of the effort the girl’s put in this season. Depending on how Lynnfield ends up, we could finish the season having only lost to the state champions. I knew long before making it to the North Final and finishing 16-1 that this team was special, mainly because of how much they wanted to improve. I hope to build on this success and push a little bit further next season.”

Lynnfield flexed their muscle the entire match and showed why they are one of the best tennis programs in the state and now hold 12 sectional titles since 1989.

At first singles Marissa Galuppo played a solid first set but was ultimately beaten in straight sets 6-4, 6-1. Aly Budny was beaten soundly at second singles 6-0, 6-0 and Tia Campagna was swept at third singles 6-3, 6-3.

Both doubles teams struggled against strong opponents and combined to win just one game. At first doubles Meg Carlo and Kaylin Scher fell 6-0, 6-0 and Jenny Crotty and Meghan Griffin lost at second 6-1, 6-0.

Finn on the match, “Tough day against a tough opponent. Lynnfield showed up with their A game and deserve a lot of credit. They seem to always play great in the biggest matches.”

Squeaked past Swampscott in North Quarters, 3–2

The Hornets beat the Swampscott Big Blue 3-2 in the Division 3 North Quarterfinals on Saturday, June 6.

Sophomores Marissa Galuppo and Aly Budny had tough matchups against superb players. Galuppo lost at first singles 6-1, 6-0 and Budny was beaten at second 7-6, 6-1.

Advanced to North Finals with win over Austin Prep

The Lady Hornets downed the Austin Prep Cougars 4-1 in the Division 3 North Semifinals on June 10. It was their second victory over Austin Prep on the season.

Marissa Galuppo won an incredible match at first singles. After dropping the first set 2-6 she fought back in the final two sets. Galuppo won the final sets in tiebreaks by identical 7-6 (7-3) scores. At third singles Tia Campagna won easily in straight sets 6-0, 6-1. Aly Budny suffered the only defeat at second singles 6-4, 6-4.

Both doubles teams took care of business. At first doubles Meg Carlo and Kaylin Scher took the first set 6-2 but were pushed to a tiebreak in the second set which they won 7-6 (7-3). At second doubles Jenny Crotty and Meghan Griffin cruised in straight sets 6-4, 6-1.