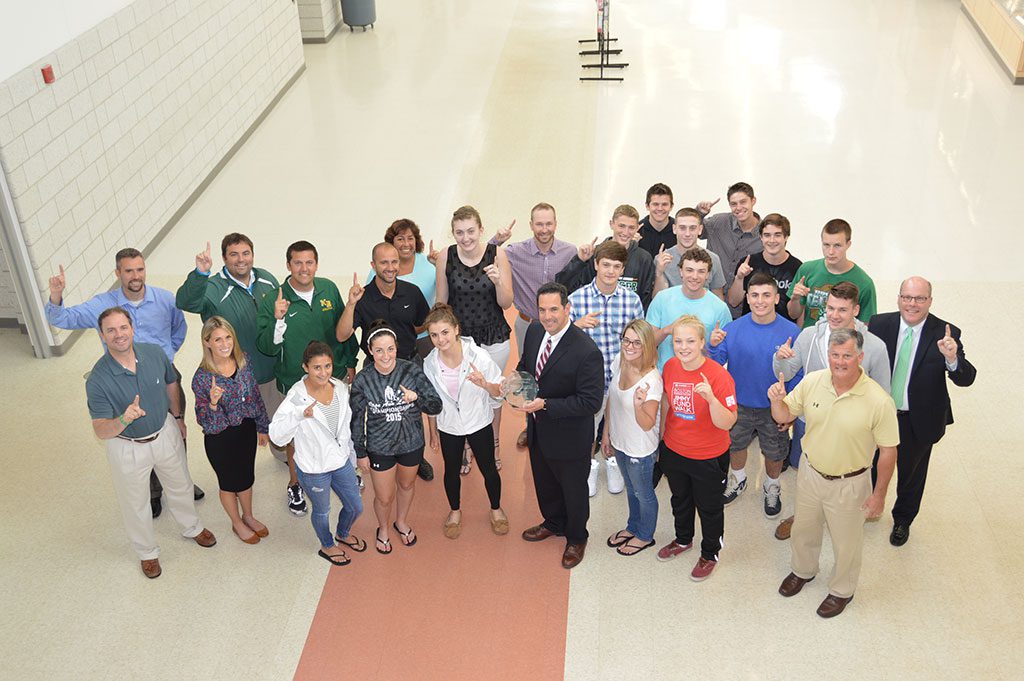 NORTH READING — Dave Johnson, the Athletic Director at North Reading High School, knew the school’s 2014–2015 athletic teams had a special year, on and off the playing fields. Johnson and the rest of the school’s administrators, athletes and coaches found out just how special this week, when NRHS won the Cape Ann League’s Hyland Award, symbolic of excellence in Academics, Athletics and Sportsmanship in the CAL’s Kinney (Large School) Division.

The Hyland Award has been awarded by the CAL for a number of years as symbolic of the CAL’s top performing athletics program in terms of wins and losses. This year for the first time the award has been rebooted – Hyland Award 2.0, if you will– to place equal emphasis on academics and sportsmanship, and North Reading has been named the winner.

The award is based on three components, Johnson explained: grade point average, with a 3.0 per team, sportsmanship ratings that other teams assigned to North Reading teams, and the school’s overall winning percentage from September to June.

This is the first time NRHS has won the Hyland Trophy, Johnson said.

“The CAL has always had the Hyland Award for overall winning percentage,” Johnson explained. “This year the athletic directors took two other important components, academics and sportsmanship into consideration, to make if fair for just about everybody, even smaller schools that didn’t have as many programs.”

The award’s criteria for academics are that every varsity team must have a 3.0 grade point average or better, Johnson said. And every team in the league is given a sportsmanship grade by every other team they play. So it’s one–third athletic record, one–third academics and one–third sportsmanship.

Johnson said the new criteria makes it somewhat fairer for the smaller schools. Even though North Reading is now the second or third largest school in the Kinney Division, it allows North Reading to better compete with the larger schools. “It means you’re winning the games with quality student–athletes who are playing the game and conducting themselves well and representing their high schools in the proper way.”

“It was very close this year but we were able to pull it out. We had a very nice win–loss percentage across the board, fall, winter and spring and I’m very proud of how other teams looked at us and how we conducted ourselves and the expectations the coaches have for the student–athletes.

“We had a very, very strong grade point average for ours student athletes. I was pleasantly surprised because we had a very good junior–senior class and the student–athletes really rose to the occasion in the classroom.”