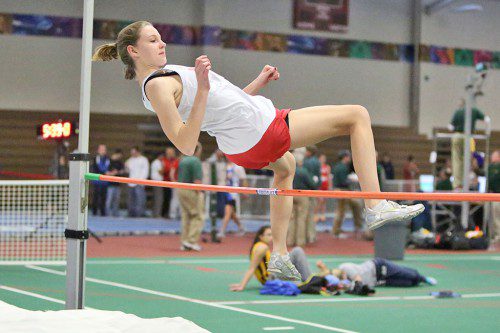 MADDIE ORO is among those returning to the MHS girls indoor track team and has already qualified for States after a win against Stoneham. (file photo)

MELROSE —  Melrose’s successful girls’ indoor track team returns to the winter season with a win under their belt. On Dec. 19 the team took a 50-36 win during a dual meet against Stoneham, the perfect place to start for the increasingly popular team.

Melrose, coached by Trevor Rudolph and assistant Gene Metto, sits at 1-0 with a few players already qualified for states. “We had a good effort against Stoneham, a few of our field event athletes already qualified,” Rudolph says, noting the efforts of high jumpers Maddie Oro and Haley Moss. “Our field events will be strong this season and we’re focusing on versatility, especially with our younger athletes. We want to go outside our comfort zone.”

The team will be led by their tri-captains, seniors Anna Steele and Maddie Manfra-Levitt and junior Emily Donovan. The trio be in charge of nearly 60 athletes on the roster, a large number that indicates a growing interest in the sport. And why not? Melrose has sent numerous athletes to college to compete in track and field, including state champs Bionca St. Fleur, Annalisa DeBari and Olivia Downey, along with recent grad Ashley King. “Our athletes’ experience on this team paved the way to great college careers,” says Rudolph. “We saw a lot of our recent grads coming back on holiday break just to lend a hand. I tell my underclassmen that these are the girls that created the footprint. This is how it is done.”

The Lady Raiders’ captains Steele, Manfra-Levitt and Donovan all bring to the track experience in statewide competition. Steele competes in the shot put and 4×400 relay, Manfra-Levitt the 55 hurdles and Donovan the 4×400 relay and 600 run. “Emily, as a junior, loves what she does and works hard at the 600 which is a tough race. Madeline serves as our leader on the hurdle team, a hard worker who has come a long way. Anna is just one of the finest athletes out there, she throws and runs, she does it all.”

Against the Spartans, shot put hurlers Shaylan McCarthy placed second with a throw of 29.07 and Anna Steele third at 28.00. Maddie Oro had an impressive 5’1″ reach in the high jump with Haley Moss right behind at 4’11”. “Maddie and Haley are great leaders for us and already qualifying after one meet is a testament to their talent,” said their coach.

The team’s two relay teams also flew past Stoneham behind the efforts of their 4×200 team, Emily Donovan, Kaitlin Carson, Melanie Cohan and Erin Reardon; and their 4×400 team, Maddie Oro, Anna Steele, freshman Sarah Herron and Emily Donovan. In the 55 hurdles Maddie Manfra Levitt second and Melanie Cohan third. Lydia Gyurina and Tara O’Shea earned the first and second spots in the two mile. Melrose’s Emily McCarthy and Holly Moore nabbed the second and third spots in the mile. In the 1000 meter Barbara Kosco placed second and Lauren Connolly third. In the 600 meter Emily Donovan placed first and in the 300 dash Anna Steele placed first and Maddie Oro second. In the 55 dash Victoria Asia and Emily Bertolaccini placed first and second. The overall effort proved that filling in #2 and #3 spots can be just as effective as nabbing top spots.

“As a program, we like to do more with less,” says Rudolph. Because of Melrose’s lack on indoor practice space, the team is often relegated to running the football field or, in the case of hurdles and sprinters, the hallway of the school. That doesn’t affect their overall performance however, given the success of the program, it only makes you wonder what more they could do given the tools.

Overall Melrose aims to retake their league title this season but beyond that, it’s not just about wins and losses “First and foremost, we’d like to get our relay teams qualified for states early in the season,” says Rudolph. “I tell the kids that it’s not whether you win each race it’s what you put into it. If you give your all, I’m happy and you will improve. We’ve seen it happen, there is a history there.”

Melrose, at press time, was scheduled to compete against Wilmington on Tuesday (post deadline). They will continue their league meets when they take on Burlington at Boston University on Tuesday, Jan. 6 at 5 p.m. 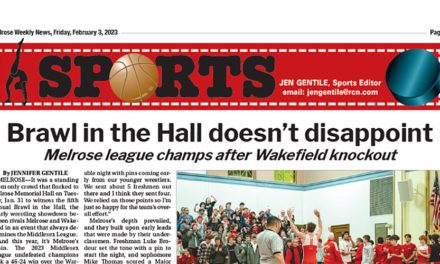