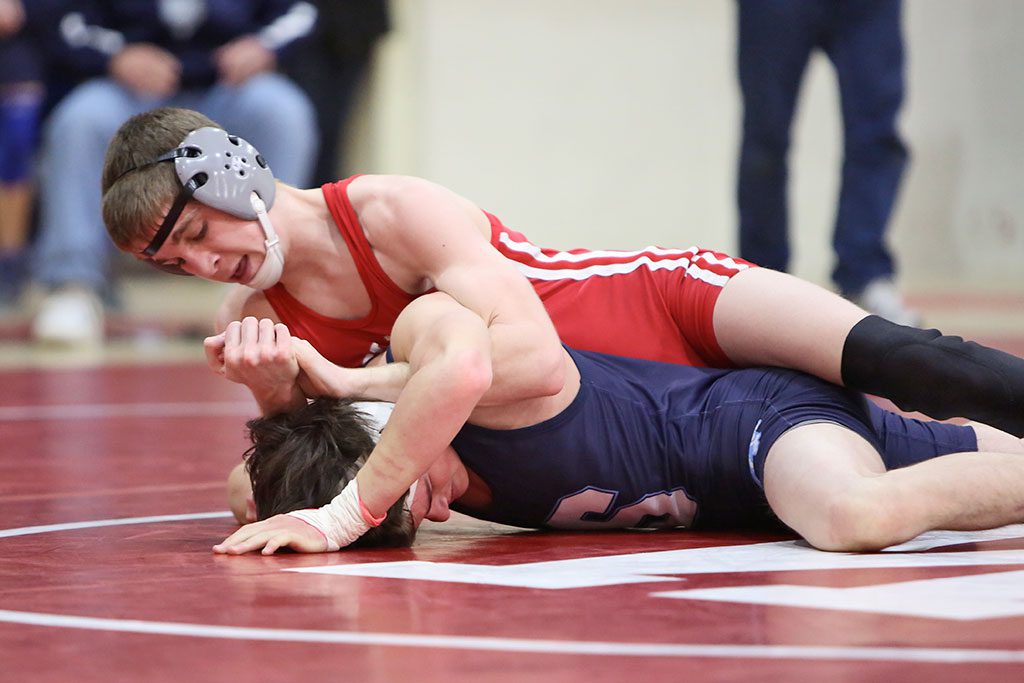 The 2014-15 season of the Melrose High School wrestling team is well underway, with the team already competing in numerous meets. Melrose brings to the floor seasoned veterans, including a state champion, while it looks to make its mark in the Middlesex League.

The team kicked off its season on Dec. 19 at the 2014 Wayland Holiday Tournament. Coming up big was Ryan Stanton who swept the competition in the 120 class, beating opponents Hamed Nilforoshan, Justin Kasilowski and Jack Keily for a first place finish. Teammates Mike Doucette and Nick Disley took second place honors in the 182 and 285 weight classes, respectively. Doucette took out opponents from Concord and Waltham before falling to Brian Long of Wellesley. Disley beat opposition from Lowell and Bedford before falling to Mike Ramos of Framingham. Melrose’s Antonio Difronzo (3-2, 170 class), John Siebert (3-2, 145 class) and Chris Reale (4-2, 138 class).

Over the weekend, the team competed in one of the most daunting meets of the year, the Lowell Holiday Tournament. Melrose scored 43 points among a field of 700 wrestlers. Showing some strength was Mike Doucette who enjoyed a 5-3 record and eighth place finish in the 182 class. Doucette pinned Jason Rogers of Southington, Conn. and Matt Stamas of Andover but fell in the championship round to Nick Koury of Springfield. He also enjoyed two pins in consolation rounds. “Mike is our workhorse,” says head coach Jim Blieler, he went to All States last year and had such a strong season and we expect him to do well this year too.”

Another Melrose wrestler who walked away with a winning record was Antonio DiFronzo who went 3-2 in the 170 weight class. “He did well against these teams, he’s just a tough kid,” says Blieler. Senior captain Chris Reale  split the day with 2-2 records. “Chris has stepped up for his,” comments his coach.

Ryan Stanton remains undefeated in the season with a 9-0 record, hoping to earn another state title as he did last season in the 113 weight class. “He won the Wayland tourney and fought hard in Lowell,” confirms Blieler. Antonio DiFronzo is another Raider who shows a lot of promise. “He’s a real tough kid, he’s still learning but showed a lot of promise against the Lowell teams,” says his coach. One wrestler to keep an eye on is junior Jack Seibert, who competed well in Wayland. “Keep an eye on him, he is a real plus for us,” says his coach.

As for the competition, Melrose lost a close one to Burlington falling to just six points shy, but the entire Middlesex League is always unpredictable. “Teams rise and fall in a matter of a week in this league, especially if you battle injuries. We just wrestle until the end,” says Blieler.

Melrose wrestling fans can look forward to the high school hosting the Middlesex League Meet which takes place on Saturday, Jan. 31 at the Melrose Veterans Memorial Middle School gymnasium. But well before that, Melrose has a slew of home meets at the Marcoux Gym, including this Saturday’s meet against Greater Lowell at 10:30 a.m.