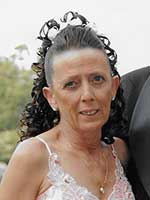 Born on October 17, 1953, she was the eldest daughter of the late Huguet and Beatrice C. Lanteigne (Acorn) of Reading/Montague PEI. She was raised in Montague, PEI and Reading but was a resident of Medford for the last 44 years. She was a member of the Massachusetts Municipal Workers Union. She was a beloved Traffic Supervisor for 34 years in the City of Medford.

Leona was a warm hearted woman who would put everyone else’s needs above her own. Nothing meant more to Leona then her family and friends that have surrounded her throughout her life. She was a caring mother, grandmother, sister, aunt, and daughter. Leona loved to drive her red convertible down South Border Road while listening to Elvis, Billy Joel, and Johnny Cash. Leona also loved to spend time at the beach and reminisce about the good times that she had shared with everyone who was a part of her life.

Her funeral from Croswell Funeral Home, 19 Bow Street, North Reading on Friday, October 28 at 9:45 a.m., followed by a 11 a.m. funeral Mass at St. Theresa’s Church, 63 Winter Street (Rt.62), North Reading. Calling hours will be held on Thursday, October 27 from 4 to 8 p.m. Memorial donations may be made in her memory to the charity of one’s choice.