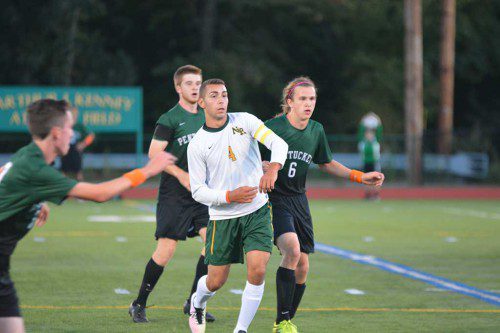 NORTH READING — With three games left in the season, the NRHS boys varsity soccer team needs to win two out of their last three games to qualify for the MIAA tournament. North Reading was scheduled to take on Lynnfield Oct. 25, (Ed. Note: the Hornets won, 3–0) and will play at home vs. Dracut on Saturday, Oct. 29 at noon. On Tuesday, Nov. 1, the boys will entertain St. Mary’s of Lynn at 3:30 p.m. This is a make–up game that was rained out on Oct. 15. The boys are 7–7–2 with 16 points in the CAL.

The Newburyport Clippers avenged an early season defeat to the Hornets with a 2-0 victory on October 17.

North Reading controlled the run of play and created good scoring chances in the first half but never scored. Unfortunately, in stoppage time the Clippers executed a short corner and after consecutive headers the ball floated over senior goalie Liam Rutherford’s head and into the net. Newburyport took a 1–0 lead into the break.

The Hornets couldn’t generate any consistent attack in the second half. With about 10 minutes left the Clippers scored again to put the game to bed.

The Hornets suffered their third straight loss, falling to the Pentucket Sachems 1–0 on the road on October 19.

Early in the first half senior Antonio Catino had two great scoring opportunities. Unfortunately one was saved by the Sachems’ goalie and the other went over the crossbar. In the seventh minute Pentucket made the Hornets pay for those missed chances.

On the play, senior defender Zach Robarts was stride for stride with a Sachem forward who went down under minimal contact in the box. The referee awarded Pentucket a penalty kick which the Sachems converted to take a 1–0 lead. For the rest of the first half neither team created any great chances and the score remained 1–0 at the half.

In the second half North Reading came out with a drastically new lineup. Liam Rutherford came out into the field to play defense, Robarts and sophomore Kevin Wall went to midfield, and junior Burke Riesenberg went into the goal. The lineup change created more chances for the Hornets, but despite the big advantage in shots and scoring chances North Reading couldn’t find the equalizer.

The Hornets continued with the new look lineup that they debuted in the second half against Pentucket. Early on it appeared that the change would work out, but the Vikings got on the board first against the run of play.

The early goal didn’t deter North Reading and they answered back only minutes later on a great header from Moreno on a feed from Liam Rutherford. Not long after the tying score Tramontozzi put the Hornets in front with a nice header. Branconnier added a third goal right before the half and the lead was suddenly 3–1.

North Reading kept the pressure on in the second half and created more scoring opportunities. But it was Triton who got on the board in the second half. The Vikings put that free kick off of the Hornets defensive wall, but the ball rebounded right back to the shooter who hammered the ball into the net. Fortunately, the rest of the game was uneventful and North Reading held on for the win.