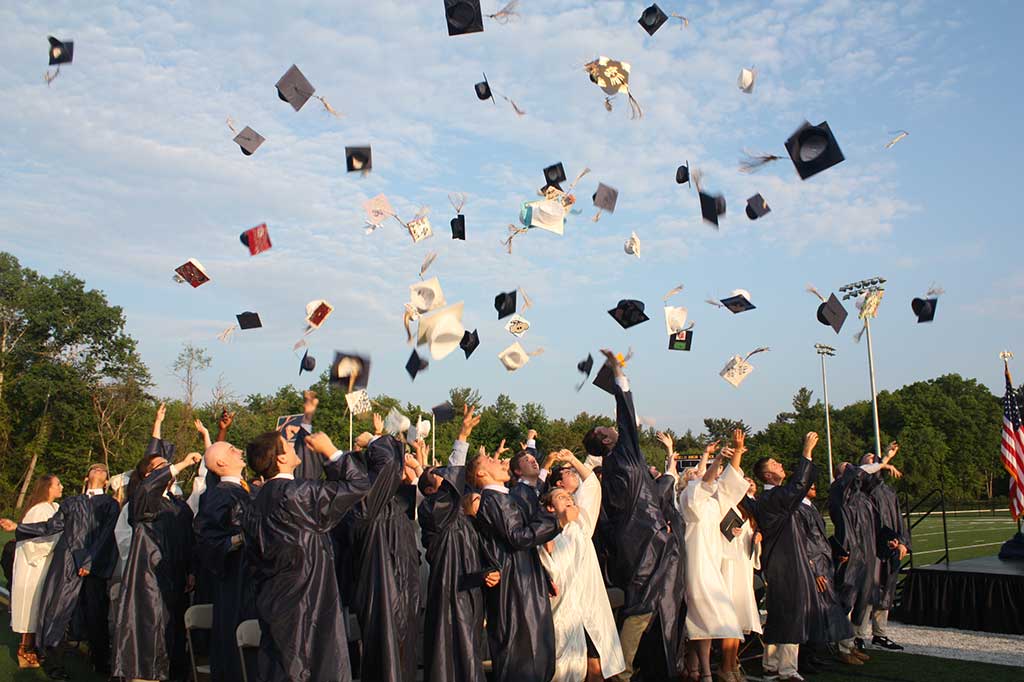 MORTARBOARDS tossed high into the air to celebrate their graduation Friday night represented the final act to be done in unison by the members of the LHS Class of 2016.

LYNNFIELD — With the threat of showers in the rear view mirror and a promising future just over the horizon, the 160 members of the Lynnfield High School Class of 2016 bade adieu to their high school careers and stepped into the future June 3.

The 57th graduating class in school history basked in the glory of its accomplishments during commencement exercises held at Pioneer Stadium for the second time since the LHS fields project was completed in October 2014. High School Principal Bob Cleary said the Class of 2016 was “excited that the weather held off” and graduation was held outside.

Choi congratulated the Class of 2016 on concluding their high school careers. She said the class made countless memories over the course of their 12 years in school together.

“We’ve met people who have taught us the importance of friendship,” said Choi. “I can’t tell you how comforting it is that I’ve made friends who I know will support me unconditionally, and whom I can look forward to coming home to. We’ve embarrassed each other and lifted each other up – both equally important in order to facilitate growth. And even though we still have a lot more maturation to go through, we’ve gotten a better idea of who we are as individuals. Memories like ours can never be replaced.”

With the Class of 2016 set to sail off into the sunset, Choi said she doesn’t “want the fear of messing up to impair any of us from shooting for our goals or taking certain opportunities.”

“If we let ourselves be imperfect, we’ll learn from the experiences,” said Choi. “I bet we’ll achieve even more than we think we are capable of. We’re going to look back on these years of our lives when we’re older, and it’s up to us whether we leave ourselves with regrets or with valuable memories. The whole world is our classroom now. It’s time to go start some new lessons.”

Cleary provided some brief remarks following Choi’s speech. He said, “the Class of 2016 has a lot of great qualities, but the one that truly defines them is their character.”

“At the beginning of the school year, we speak to the senior class about their responsibilities as role models in the building and the fact that the underclassmen look to them as an example of how to act, how to treat others and how to conduct one’s self in a respectful and decent manner,” Cleary added. “This class has done a tremendous job in their roles as leaders both in and out of the building. They have been shining examples of how to conduct yourself well and take care of business every day.”

Braconnier said when the Class of 2016 was ringing in the New Year the class recognized they were “not just counting down to the start of any other year, it was the count down to our year.”

“We have identified as the Class of 2016 for so long now that the numbers have developed into more than just a simple meaning,” said Braconnier. “The digits 2-0-1-6 have grown familiar and significant to us. They have served as our identity, our uniter, our hope, our freedom. They have stood for both the end and the beginning. They have represented our loss and our victory. Our sweet, sweet victory.”

While Braconnier acknowledged the Class of 2016 has “largely exhausted the Lynnfield bubble” and craves “the alluring newness of the outside world,” she said the class has “made a home here with those we love.”

“Lynnfield has provided us with a safe environment to grow into ourselves and to discover our direction in life,” said Braconnier. “So as we depart from this small town to a much larger world, we all have one thing in common: Change is inevitable. Whether you run to it with open arms or avoid it at all costs, we all must accept change and use the countless opportunities it has to offer. We have been given a home here in Lynnfield; now we must go out and search to create our own.”

After the LHS Concert Band, Senior Chorus and Chamber Singers performed a cover of David Glen Eisley’s “Sweet Victory,” DelNegro offered remarks to the Class of 2016.

DelNegro said the Class of 2016 began their school years together pondering what they want to do when they grow up, with each class member offering different answers such as being an astronaut or president of the United States.

“But there is one answer to this question that can be the same for everyone, and it was best said by John Lennon,” said DelNegro. “When he was asked this question, John simply answered ‘happy.’ I truly believe this is the best answer anyone can give and one we should all truly aspire to be.”

DelNegro said Lynnfield has been the Class of 2016’s “comfort zone” for many years, but added graduation marks a new beginning, as “we are about to graduate and go all over the country.”

“So here’s to you Class of 2016 and to getting out of our comfort zone or our little bubble of a town to truly discover who we are and what we are meant to do and be in this world,” said DelNegro.

After DelNegro concluded her remarks, Superintendent of Schools Jane Tremblay offered some brief remarks before bidding farewell to the Class of 2016.

Tremblay said the Class of 2016 is “160 students strong” and is comprised of “77 young women and 83 young men, with three sets of twins.” She said parents, family members, teachers and school officials are incredibly proud of the class’ accomplishments, but said the time has come for the Class of 2016 to set out into the future.

“We, your trusted adults, have been changed for the better for having walked beside you, behind you and at times in front of you,” said Tremblay. “But now, like most things in life, it is time to move on. It is time for you to put some distance between us. It is time for you to venture out, to begin to make your own way, to make your own choices and create your own future one decision at a time. So as you begin this chapter without us, write your own definition for success then pave the way to make it happen.”

End of an era

School Committee Chairman Tim Doyle awarded diplomas to the 160 graduates with the assistance of Cleary and Tremblay.

After the graduates received their diplomas and Cleary wished the graduates well as they begin the next chapter of their lives, the Class of 2016 threw their mortarboards in the air, officially marking the end of their Lynnfield High School careers.