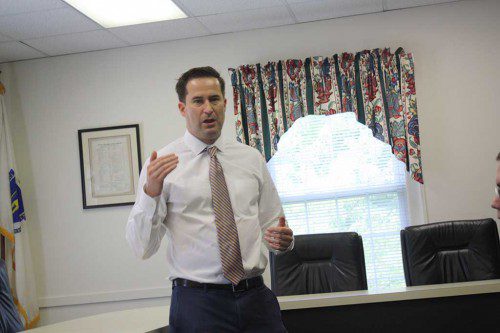 Moulton made the local stop as part of his Congress on Your Corner initiative, where he has been meeting with constituents from the 39 communities in the Sixth Congressional District.

“I think hearing directly from the people that I have the responsibility to represent in Washington is fundamentally important for me to do my job,” said Moulton. “At the end of the day, I am a public servant who works for you and I take that responsibility very seriously.”

Moulton participated in a question and answer session with the 20 residents in attendance about a variety of issues such as health care, veterans’ issues, the abandoned Kinder Morgan pipeline, foreign policy and other issues.

Moulton said he serves on three committees in Congress: Armed Services Committee, Budget Committee and Small Business Committee. He said the committees he serves on address his “three big buckets” — international issues such as ISIS and terrorism, domestic issues and local issues.

At the domestic level, Moulton, who served in the U.S. Marines from 2001-2008 and fought in Iraq, said his “number one priority is taking care of veterans.”

“I think this is a place where even though we have a divided Congress, we can get a lot of work done,” said Moulton. “Taking care of veterans should not be a Democratic priority or a Republican priority. It’s an American priority. It’s something we should agree on, yet veterans are not getting the care today that they deserve.”

Moulton said he is the only member of Congress who gets his health care from the Veterans’ Affairs Administration and said he has “seen first hand the many challenges veterans face.” While Moulton said he received great care from VA hospitals in Boston and Bedford, the congressman was sent home with the wrong medication after he had surgery at a Washington, D.C.-based VA hospital.

“It’s really erratic,” said Moulton. “My bottom line is our veterans deserve the best health care in the world and its clear we are not delivering that as widely across the board.”

Dick Shafner, 67 Pillings Pond Rd., said the Affordable Care Act, commonly referred to as Obamacare, has been “very good to us so far,” particularly for his sick wife. However, he asked Moulton how the health care law could be improved.

Another resident disagreed with Shafner’s belief Obamacare has been beneficial. The man said the country cannot afford Obamacare because “premiums are going through the roof.”

Moulton said he doesn’t believe “Obamacare should be thrown out like the Republicans want to do, but I don’t think its perfect like some Democrats say.” While Moulton said it’s great 22 million Americans now have access to health care that they previously did not have, he said he supports repealing the medical device tax because it hurts small businesses in the health care industry.

“The way the tax is implemented disproportionately hurts small businesses,” said Moulton. “If you look at the medical device industry, a lot of the innovation comes from small new companies and start-ups. Over time, these new medical devices actually save money for the health care system. But if you put a tax on it, it’s easy for big companies such as Johnson & Johnson to absorb, but it could put a lot of small, innovative companies out of business. And that is not good for the health care system.”

An older veteran in attendance expressed his frustration with the VA backlog. He said he put in a claim at the VA three-and-a-half-years ago that still hasn’t been resolved. He asked Moulton “why haven’t people been fired at the VA?”

Moulton agreed with the man that the VA backlog “is a big frustration a lot of veterans have.” He said if a veteran gets denied a claim and files an appeal, he said the appeal will be heard in 2022, which he said is “a real problem.”

“That is not giving our veterans the best health care in the world,” said Moulton.

Moulton said he introduced the Faster Care for Veterans Act along with Congresswoman Cathy McMorris Rodgers (R-WA), which would require VA hospitals to use a patient self-scheduling online application in certain parts of the country to test whether this technology results in increased access to care.

“We have 169 bipartisan co-sponsors right now,” said Moulton. “It will help people make their appointments at the VA more quickly. It’s not going to solve the whole problem but it’s a step in the right direction.”

Moulton said he is working on other legislation pertaining to comprehensive reform at the VA and addressing the backlog.

“The system that exists right now just isn’t working,” said Moulton. “We can fire some people and hire some new people but the bottom line is the system needs to be gutted and changed. And I don’t think you are going to see a big difference until a lot of people get behind more fundamental changes in how the VA operates.”

Another resident said the telecommunications industry needs to be regulated because cable companies such as Comcast and Verizon are charging their customers $200 and $250 per month for cable and Internet service.

“They are playing games with consumers,” the man said. “I am paying more for cable TV than I am for heat and electricity. There is something wrong with that.”

Moulton said “there is a big debate in Congress about whether to regulate the cable industry.”

Another resident thanked Moulton for opposing the Kinder Morgan pipeline.

Moulton said it was clear early on “Kinder Morgan was not listening” to the communities impacted by the disbanded Northeast Energy Direct (NED) pipeline project. However, he said New England needs to address its “high energy prices.”

Another resident questioned why the government is more concerned about Iran and not Saudi Arabia. The man noted the CIA was involved in the 1953 coup d’état of former Iranian Prime Minister Mohammad Mossadegh, who was democratically elected, and helped install Mohammad Reza Shah Pahlavi as the country’s leader until the Islamic Revolution in 1979. He inquired why Saudi Arabia is not held to the same standards as Iran even though Saudi Arabia has been accused of funding terrorism.

“I don’t see Iran as our enemy,” the man said. “They are the ones we want to hold up as enemies when all of this stuff has been coming out of Saudi Arabia. I just don’t get it.”

While Moulton did not address the issues surrounding Saudi Arabia, he said the man was correct about the 1953 Iran coup. However, Moulton noted Iran is a “state-sponsor of terrorism” and has “been threatening our allies in the Middle East.”

“There are things Iran does that we are strongly opposed to,” Moulton continued. “But that doesn’t mean we can’t work with them on places we align. That is why I supported the Iran Nuclear Deal. I was listening to a speech from President Reagan when he came back from meeting with the Soviets. Everybody was criticizing him for talking with these people because they were our enemies. They were our enemies but that is who you have negotiations with and do treaties with. You don’t need to do treaties with your friends. I think there is an opportunity to work with Iran but I don’t know how long it will take Iran to come around.”