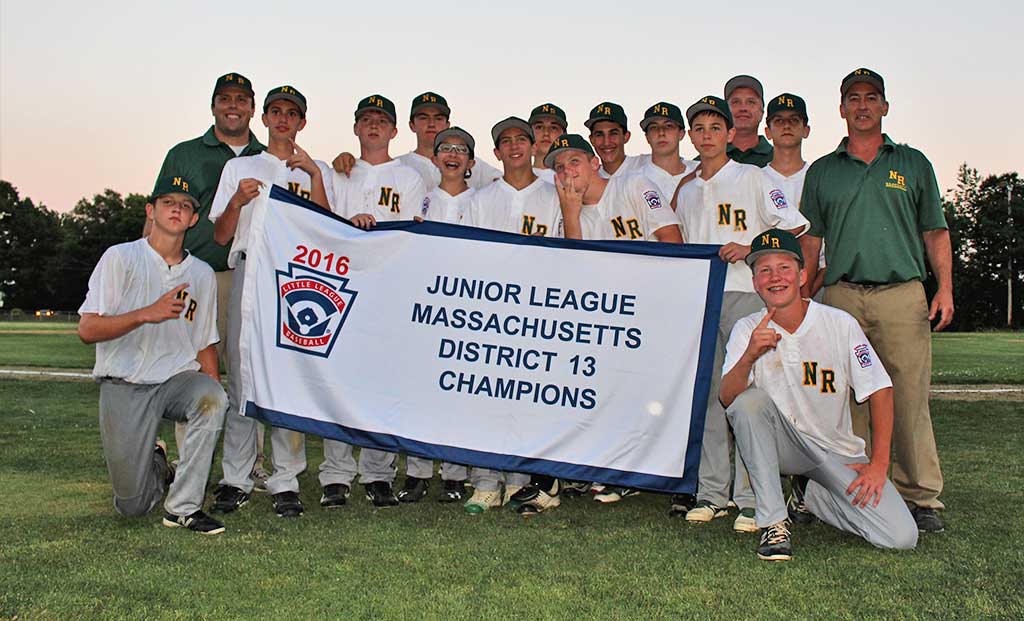 The Hornets reached the title game by going 2–1 in pool play. Behind the pitching combination of Jimmy Currier (5 innings) and Jack Keller (2 innings), they opened the tournament with a 6-4 victory over Woburn. Trailing early, North Reading picked up three runs in the fifth inning and another three in the sixth, thanks to a swarm of hits by Demitri Boulas, Gerry Callagy, Chris Gwozdz, Ryan Kavanaugh, Alex Vercolen, and Keller.

In their second game, the Hornets were tripped up by Stoneham, 7–1, but rebounded to beat Wakefield, 7–2, to earn a spot in the final. Against Wakefield, Joey Frammartino pitched a solid 6.1 innings, with Callagy taking the mound for the last two outs. Michael Vittozzi, Cam Randazzo, and Keller all reached base with singles, Matt Luciano and Frammartino each had two hits, Kavanaugh went 4–for–4 with a double, and Gwozdz knocked in three runs.

The District title game was held at Woburn’s Leland Park. Currier was back on the mound and received some terrific defensive help early on from center fielder Frammartino. In the first inning – with one run already in, no outs, and men on base – Frammartino snagged a fly ball and threw out the runner trying to tag up from third. Currier then picked up the third out with a four-pitch strikeout. In the bottom of the inning, the Hornets struck for four runs, the big blow being Luciano’s bases-loaded single.

Although Stoneham scored six times in the third inning, North Reading turned in two stellar defensive plays to avert even bigger danger. Catcher Callagy nailed a runner trying to steal third base and Luciano made a perfectly timed grab at the left field fence.

Finding themselves trailing, 8–4, the Hornets seized the upper hand with five fourth-inning runs, helped along by Currier’s two-RBI single. But Stoneham kept answering back. They tied things up, 10–10, with a run in the sixth, before the Hornets moved in front again in the bottom of that inning behind hits from Currier, Evan Steele, and a clutch single down the first base line by Randazzo.

Keller was now on the mound in relief, and fanned six batters over 3.2 innings of work. After Stoneham rallied with the tying run in the top of the seventh, Keller worked his way on base in the bottom half of the inning, moved to third on a Luciano single, and then sprinted home with the game-winning run on a passed ball.

In the Sectionals, North Reading, Canton, and East Boston are playing in a double-elimination format. There is a game tonight at NRHS starting at 5:30 p.m., and another on Saturday at 2 p.m. If necessary, a final game will be held on Sunday. The Sectional winner will advance to the State Championships.

NRLL’s 10–year–old All-Star team finished district play with a 3-2 mark, closing things out with a 10-9 win over Wakefield. The team dropped heartbreakers to Woburn and Reading, preventing them from advancing to the finals.

The Hornets received pitching magic from the arms of Jack Cronin, Derek Daley, Aidan Driscoll, Brandon Eng, and Aldo Vittozzi. Their efforts were supported by the bats of Nicholas Jones, Rowan Oostman, Chris DaCosta, Zac Demetri, Sean Heins, Noah Pineo, and Conor Griffin. And the team certainly would not have been complete without the glove work and base running of Alex Chaisson, who led the Hornets in stolen bases, runs scored, and “Special Pinch Runner” duties.

The NRLL 11–year–old All–Stars reached the District finals before falling to Wakefield, 11-9, while the 12-year-old All-Stars were 2-2 with one game to play and still had an outside lane to reaching the District semifinals.

North Reading’s 14/15-year-old Pony League team sported a 5-2-1 record at the season’s halfway mark, well-positioned for one of the league’s playoff spots. Eight of the league’s 14 squads reach the postseason.

The Hornets then played Lowell Highlands to a 9-9 tie in a game shortened by rain. Ryan Connor lined a home run to account for North Reading’s first two runs, part of his three-hit game, and the Hornets also received hits from Dante Centofanti, D’Ambrosio, Zack Rinaldi, Veneziano, and Wallner.

North Reading Little League, with coordination from the North Reading Diamond Club, will be running fall baseball programs for youngsters ages 5-16. Those interested should visit www.nrll.org for more details.