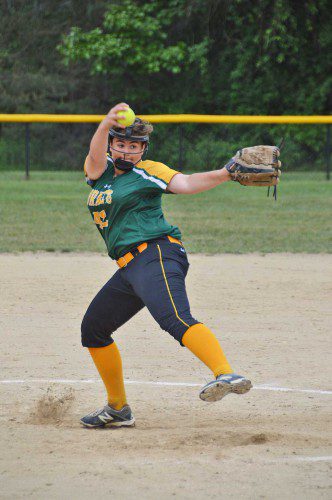 JULIA PERRONE’S mastery as pitcher (and hitter) for the Hornets (she won 13 games) was a big part of the 2016 softball team’s success. (Transcript File Photo)

The Boston Globe named Perrone to its 2016 All Scholastic Softball team. “The Cape Ann League Kinney Division Player of the Year, Perrone pitched 112 innings this season, striking out 139 and compiling a 1.94 ERA. She batted .481 this season with 21 RBIs. Perrone also plays field hockey,” the Globe said.

Perrone was also selected as an Eagle–Tribune Softball All Star for leading the Cape Ann League Large champs in hits, (37), and average, (.481) and finishing third in RBIs. She also won 13 games as pitcher with 1.94 ERA and 139 strikeouts in 112 innings. Julia was the team and CAL Large MVP and she batted .373 with 31 RBIs in 2015. Julia lettered as freshman and is a three-year starting field hockey goalie. She is also a second-team All-CAL in fall and a National Honor Society student who scored 1,920 on SATs, the Eagle–Tribune cited.

The 2016 softball Hornets finished 18–5, made the Division 2 North quarterfinals round and won the team’s first tournament game in five years in addition to being the CAL Kinney Division Champions.