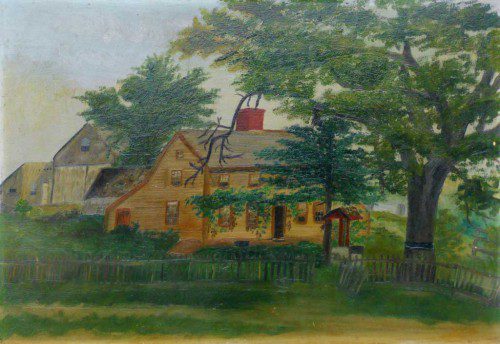 It’s not exactly the Isabella Stewart Gardner Museum heist but it appears that Wakefield may be dealing with an art theft mystery of its own.

In the past year, a combined total of three paintings have gone missing from two of the town’s oldest institutions, located almost directly across Main Street from one another in the downtown. At least two of the paintings are believed to be by the same artist and all three have some connection to the Unitarian Universalist Church at 326 Main St.

Last August, the Lucius Beebe Memorial Library noticed that a painting that had been hanging in the Trustees Room for decades was missing. The painting was by Joseph C. Payro, a local artist, photographer and history buff, who had a passion for painting 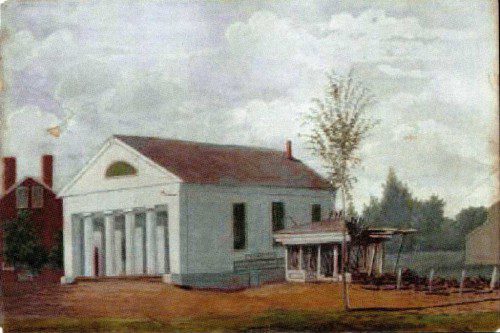 images of Wakefield’s past.

The painting, signed by Payro, is titled “East Side Main Street in 1858.” On the far left of the canvas is the Unitarian Universalist Church, the oldest house of worship in Wakefield, in one of its earliest incarnations before the steeple was added. Also in the painting, the front of the church is graced by four Greek-style columns. To the right of the church are several homes and shops, with a dirt Main Street in the foreground.

Library Director Sharon Gilley says that the library had been given a collection of Payro’s paintings in 1976 by the Payro family. Over the past year, thanks to the generosity of local resident Rick Martino, the library was having the paintings restored by a professional conservator.

Gilley notes that the paintings were inventoried prior to going out to the conservator in a couple of separate batches.

“We recognized that when one batch came back and another went out that we were missing an item,” Gilley said. “Any time the conservator takes something she leaves us with a receipt and it’s all documented. We couldn’t account for this [painting].

“We searched the building and we asked the conservator to search her van and her studio,” Gilley recalls, but there was no sign of the missing artwork.

The Trustee’s Room, where the painting had been hung, is usually locked, Gilley says.

“It gets unlocked for a short time before civic group meetings,” she points out. “I can’t figure out where the window of opportunity was for this to happen.”

The hope that it had been a simple mix-up proved unfounded but Bertrand did have some information for Gilley that would only deepen the mystery. She told Gilley that the Unitarian Universalist Church had also had two paintings stolen in a break-in last winter.

Similar to the painting missing from the library, one of the paintings depicted the church as it looked shortly after it was first built, with the Greek-style columns and no steeple. While unsigned, it is believed to also be a Payro work. The other painting is a rendering of the old Amos Boardman House, once located near Prospect and Elm streets, where the original seven members of the Unitarian Universalist Society of Wakefield had their first meetings.

Bertrand says that if a thief were to try to sell the paintings, there would be a very limited market for them.

“The only place where they might find a buyer would probably be places where people had an interest in Wakefield history,” Bertrand says.

Payro, Bertrand explains, while a skilled photographer was not a well-known painter outside of the Wakefield area.

“He mostly copied Franklin Poole’s paintings,” Bertrand says. “He made exact copies of the Franklin Pooles in his own quirky kind of way.”

While the manner of the library painting’s disappearance is a mystery, congregants of the Unitarian Universalist Church believe that they know how their paintings were stolen, even if they don’t know for sure who took them.

Church president Joe Cresta says that the paintings were discovered to be missing when a member of the congregation, Janine Fabiano, was taking down the Christmas decorations in the church sanctuary last winter. He said that when the Christmas wreaths are put up every year the paintings are taken down and stored in a closet. When Fabiano went to retrieve the paintings to put them back up last winter, they were gone.

Church members believe that a man may have entered the church one day last December while an outside group was renting the church hall for a class. It is believed that he entered the church the same way as the people in the class and then hid in a stairwell until the group left.

The next day, Cresta found significant damage to the old wooden interior doors in an apparent attempt to gain access to the church sanctuary. It is believed that the thief may have climbed the stairs to the balcony, which had a faulty lock and then dropped into the sanctuary from there. The closet where the paintings were discovered missing is on that balcony.

“That morning, when I walked into the church, I found that the person also took some wine and some food from the cabinets,” Cresta said. Wakefield Police were called and took a report on the thefts.

Cresta and other members of the congregation will only say that they have a possible suspect in mind, but don’t want to say anything that might compromise their ability to get the paintings back.

“We’re not looking to press charges,” Fabiano says. “We just want them back.”

Deputy Police Chief Craig Calabrese said that it was hard to say if the church thefts and the library thefts were related due to the six month gap in the reports of the two incidents.

It goes without saying that none of the paintings missing from the church or the library comes anywhere near the quality and value of Rembrandt’s “Storm on the Sea of Galilee” or Vermeer’s “The Concert,” two of the masterpieces stolen in 1990 from Boston’s Isabella Stewart Gardner Museum in the largest art theft in history.

But still, these paintings have a value to their local owners that goes beyond money and artistic merit.

“The sad thing is that the paintings are not particularly good or valuable,” said church member Elizabeth Lowry, who cleaned and restored the paintings the year before they vanished. “They are of significance to the congregation because one of the paintings is of the old Boardman House where the first members used to meet before they built the church.”

Cresta also laments the void that the thefts have left.

“They are certainly part of the history of the church and they’ve been there for so long,” Cresta said.

Anyone with any information that could lead to the recovery of the paintings is asked to contact the Wakefield Police, Beebe Library or the Unitarian Universalist Church.