Served in the RCAF 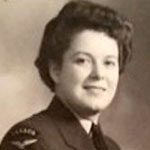 She joined the Royal Canadian Air Force in 1941, serving overseas in England during World War II, where she met John D. Duchak. They married in 1947 in Regina Saskatchewan, Canada. After moving to the U.S.A, they resided in North Reading for 30 years.

In the 1970s they enjoyed their summer vacations on Vinalhaven Island, Maine where Lois owned and operated a restaurant, “The Periwinkle.” She enjoyed her summer home on the island. She and her husband, upon retirement, moved to Rockland, Maine in 1990 to their quaint harborside cottage.

She is survived by her three sons and two daughters, Dana C. Duchak, and his companion Rochelle Pauletti of Lynnfield, Kevin W. Duchak and his wife Pamela of Jupiter Fla., Brian V. Duchak and his wife Linda of North Reading, Sharon M. Duchak of Manchester, N.H. and Patricia L. Duchak of Glendale, Ariz.; also by six grandchildren, four great–grandchildren, one great–grandchild on the way, two brothers and three sisters, many nieces and nephews.

A family celebration of her life will be held privately. Those who wish to make memorial contributions in Lois A. Duchak’s memory, can be made to your local Salvation Army, which during the war supported the Canadian and American troops, which she never forgot. Arrangements are by the Croswell Funeral Home, 19 Bow St., North Reading.