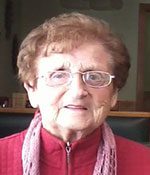 She was the beloved wife of the late Joseph K. Meuse, who died in 2009.

She was born in Wakefield, August 27, 1930, a daughter of the late George and Catherine (Titus) Mansfield, and was raised in the Greenwood section of Wakefield. Upon her marriage to Joe, they moved to Tewksbury in 1952, to raise their four children.

She worked at Wang Laboratories in Tewksbury in the 70’s and changed careers to become a bookkeeper at the Jade East and later at Oblate Father’s Novitiate and Infirmary in Tewksbury.

She was a communicant of St. William Church, and was described by her family as having devoted her life to her beloved husband, children, grand and great grand children.

She leaves three daughters: Diane Fortier and her husband Richard Sr. of Barnstead, NH, Debra Leborgne of Lawrence, Cynthia Cunningham and her husband Timothy of Middletown, R.I.; a son, Thomas Meuse and his wife Deborah (Hurst) of Tyngsboro; four grandchildren: Richard Fortier Jr. and his wife Elizabeth (Lepage) of Alton, NH, Natalie Fortier and her husband Ross Malcolm of Belmont, NH, Courtney and Kristin Cunningham; two great grandchildren, Haley and William; and many nieces and nephews. She also leaves behind her sisters in-law Mary Paiva of Greenwood, Lorraine Meuse of Hudson, Jeannette Muise of Las Vegas, NV, and Patricia Mansfield of Peabody. She was predeceased by her son-in-law, Barry Leborgne; sister Virginia Sampson; and brothers Fredrick, George, Robert and Stanley Mansfield.